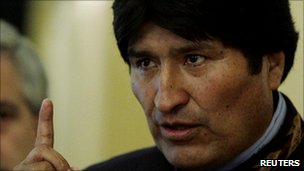 Bolivian President Evo Morales has abandoned a public event in the face of an angry protests over food shortages and price rises.

Mr Morales was due to address a parade to commemorate a colonial-era uprising in the mining city of Oruro.

But he and his team left the city to avoid a violent demonstration by miners throwing dynamite.

There have also been protests in other Bolivian cities over the shortage of sugar and other basic foodstuffs.

Mr Morales cut short his visit and returned to La Paz after protesters set off explosions close to where he was preparing to give a speech in Oruro, the capital of his home province in western Bolivia.

“The government took the decision not to respond to shameful provocations of this kind,” presidential spokesman Ivan Canelas said.
Wave of protest
Setting off dynamite is a common feature of trade union protests in Bolivia, where the explosive is widely available to miners, but injuries are rare.

In the eastern city of Santa Cruz – an opposition stronghold – protesters blocked the road to the airport to demand the government scrap an agency set up to promote food production.

The protesters say the agency – known as Emapa – is inefficient and discourages private commerce.

Smaller protests were also staged in La Paz and the central city of Cochabamba, although marches were called off because of bad weather.

President Morales is facing a wave of protest over rising food and transport costs and a shortage of sugar.

The left-wing leader’s popularity has fallen sharply since the beginning of the year, when he abandoned plans to cut fuel subsidies in the face of popular protests.

Some of the protests have been led by social movements that supported Mr Morales as he rose from being a radical peasant leader to win election as Bolivia’s first indigenous president in 2005.

This entry was posted in resistance and tagged bolivia, riot, social tension. Bookmark the permalink.