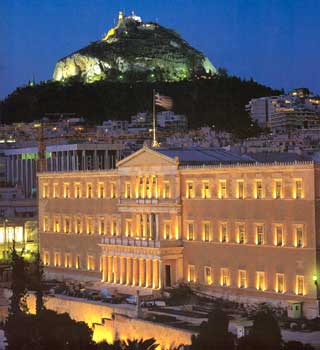 Striking doctors have scuffled with police outside Greece’s parliament as anti-cuts protests spread beyond unions to professional groups.

More than 1,000 doctors, some in white coats, staged the central Athens protest against plans to impose tougher monitoring rules for spending in the National Health Service.

Police used pepper spray during the brief confrontation, which ended without any injuries or arrests.

The country’s largest unions plan a general strike for February 23, and have announced that retailers will also join the protest and close their stores for 24 hours.

The Greek Confederation of Professionals, Craftsmen and Merchants said one in four of its small business members – or 225,000 enterprises – face the threat of closure in 2011.

Prime Minister George Papandreou said his government had no choice but to press ahead with the painful reforms.

“Even if we had a zero debt, we would had to implement radical reforms and changes to our development model. Otherwise, under the existing system, debts would soon appear,” he said.

Doctors, lawyers, pharmacists, teachers and public transport workers are all taking part in strikes this week against the latest round of austerity measures.

The government has set in motion a series of longer-term measures aimed at cutting overspending in return for international bailout loans worth 110 billion euros (£93 billion) throughout 2012.

This entry was posted in resistance and tagged austerity, greece, riot, social tension. Bookmark the permalink.