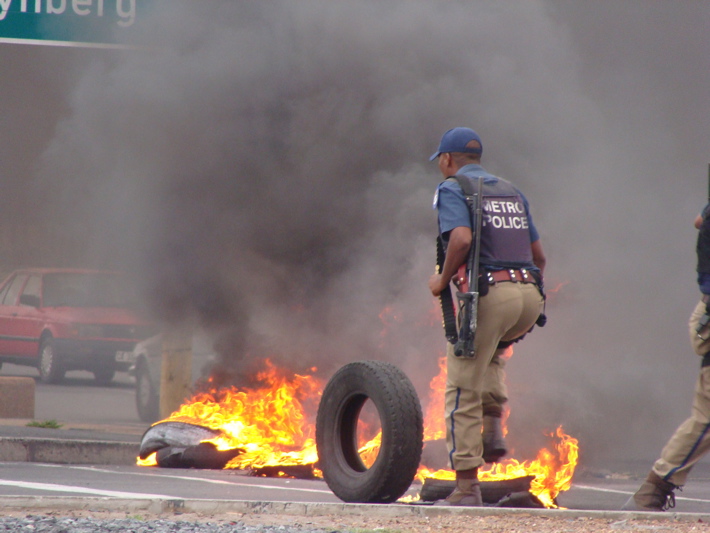 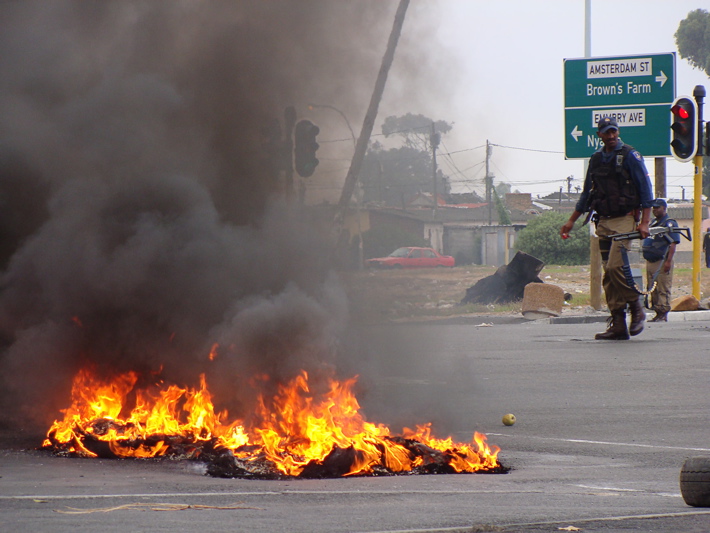 Black smoke billowed across morning rush hour traffic as angry backyarders in Nyanga blockaded Lansdowne road with burning tyres on Tuesday, forcing commuters to find alternative routes to work.The Backyarders from Nyanga’s Mau-Mau, Old Location and White City areas were protesting over the lack of housing for them and demanding the provincial government allocate houses to backyarders in housing projects in the area.

About 500 protestors blocked the busy thoroughfare of Lansdowne Road for hours before police forced them to disperse by firing rubber bullets.

Backyarders blockaded Lansdowne Road with burning tyres in protest over housing allocations. Police had to fire rubber bullets to disperse the crowd of about 500 protestors. Photo: Sandiso Phaliso/WCN

Protestor Mzimasi Khonkco, 19, who lives in a backyard in the area, said backyarders were opposing the fact that newly built houses were being allocated to shack dwellers from other areas rather than to backyarders living in the same area as the housing project.

He said backyarders had also been waiting for houses for “over a decade”. Backyarders also believed promises to them had been broken.

Khonkco said before construction on the housing project began, he and other backyarders were told that certain of the houses would be allocated to them.

“We were supposed to have been handed keys before December, but we were told that there are delays.

He said he was then “surprised” to learn that the houses they believed would be handed over to backyarders, were given to “shack dwellers”.

“We oppose that,” said Khonkco.

Backyarder Amos Nembezinye, 30, said they will protest until the provincial government listens to them.

“We are not going to stop until our voices are heard. We are fed up with empty promises. Other backyarders from other areas are listened to but no-one cares about us. We’re doing this (burning tyres) because we want to be heard and attended to,” he said.

Motorist Mvume Sibane, 26, who transports schoolchildren from the townships to Cape Town’s suburbs, said the protest meant all the children he was ferrying would be late for school.

“What the protesters are doing is not on. Why can’t they use the right channels if they are dissatisfied with something?” asked Sibane.

Ward councillor David Tshambula was not available for comment by the time of going to print.

Nyanga police spokesperson Ntomboxolo Sitshitshi said the police were forced to use rubber bullets to disperse the crowd as they “were blocking the traffic and burning tyres which damaged the road”.

She said three people – a man and two women – were arrested for public violence and would appear in court this week.

“We appeal to the community to refrain from engaging in unlawful protests,” said Sitshitshi.

She said people needed to apply to engage in peaceful lawful protest.

“People should follow formal channels to solve problems they encounter in their areas. They must know that if they break the law we will arrest them because through these protests, people’s properties are damaged.”

He said there was a meeting scheduled for Wednesday with the areas sub-council committee to resolve the issue.

This entry was posted in resistance and tagged riot, social tension, south africa. Bookmark the permalink.