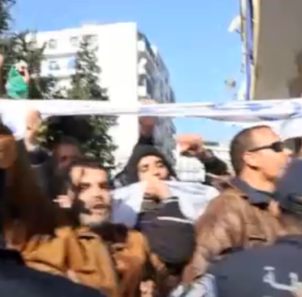 Students from several faculties in Algeria have decided to embark on an “indefinite strike”, with manifestations in cities including Algiers, Oran, Tlemcen and Annaba. The students, according to the usually well-informed Algerian daily ‘El Watan’, principally are protesting the poor quality of education and a new qualification system, but are loosely connected to the general North African protest movement.

Following a presidential decree of December 2010, the formerly used “master” degree is now replaced by a “magisterial” degree, which also would mean that an engineer education will now end up with a title equivalent to a “professional education”.

This seems to have been the last drop for Algerian student organisations, which already are complaining about the poor studying conditions and work possibilities faced in the country. Starting today, at least 500 students only in Algiers boycotted classes after announcing a large protest march to be organised tomorrow.

The student strike comes at a time when President Bouteflika is experiencing an increased popular pressure, following the events in Tunisia and Egypt. Currently, government is trying to avoid the holding of an announced mass protest march in Algiers on 12 February – next Saturday. The march is organised by the political opposition, human rights groups, trade unions, student organisations and an unemployed association.

The main demand of these groups originally was a lifting of Algeria’s 19-year-old state of emergency, which permitted government to limit political rights and to a certain degree disrespect human rights. President Bouteflika quickly announced he had

Algeria’s President Abdelaziz Bouteflika ordered government to find a legal basis to lift the state of emergency by finding other ways of “fighting terrorism.”

The Algerian President at the same time said government would accept popular protests anywhere in the country, but not in the capital, Algiers. This was reaffirmed yesterday, as government turned down the application of the organisers of the 12 February protests for an Algiers demonstration.

Authorities rather advised the demonstrators they could use the Mohamed Boudiaf sports arena to hold a public meeting. The arena has a maximum capacity of 10,000 persons, and the proposal was therefore rejected by the protesters.

The organisations preparing the 12 February protest march, despite authorities’ rejection, today still say the popular manifestation will go on as planned in Algiers and other Algerian cities.

Outside Algiers, the protest marches however already have seen their small beginnings. On Sunday, the biggest protest so far in the country was organised in Annaba, a coastal city close to the Tunisian border, where hundreds of unemployed took to the streets and expressed their dissatisfaction with the Bouteflika government.

Around 300 protesters attacked the provincial government (wilaya) offices in Annaba, shouting slogans against the government and demanding jobs. Police forces confronted the protesters and dispersed the group, threatening to use force.

Also in Algiers, there was a smaller demonstration on Sunday in front of the Labour Ministry, estimated at around 100 participants. Also this protest was violently dispersed by police forces, detaining several of the protesters for some hours.