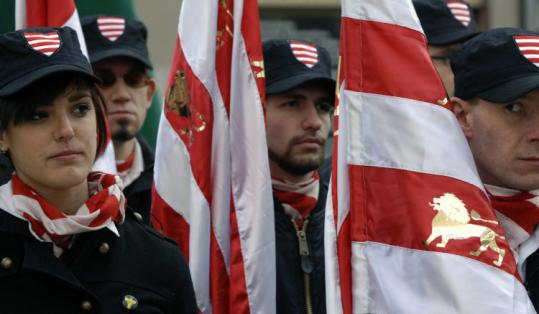 An estimated 500 people led by Jobbik president Gábor Vona protested against what they called Roma crime in Lak, Borsod county Thursday evening in response to the murder of an 81-year-old woman last week.

The protesters believe that four Roma children under 14 years of age are responsible for the murder.

The four admitted that they visited the courtyard of the old woman on January 23, turned off her electricity meter and later quarrelled with her when she demanded that they explain their actions. The following morning the woman was found dead.

There was a strong police presence Thursday as demonstrators walked along dark streets, many carrying torches, Árpád-stripe flags and various posters.

Vona said Roma may be assisted in catching up with other sections of society through work and education, but “they are not willing to do that”.

He greeted Magyar Gárda members, who he said are needed by the country, as a gendarmerie is necessary if peace is to be ensured.

He went on to say that the Roma birth rate should be lowered, or else three million Roma will have to support three million pensioners.

Only those who work should be given state aid, he said, and Roma children of lazy parents must be taken from their family and sent to boarding schools.

Vona vowed to wear the Magyar Gárda uniform at the February 14 session of Parliament, where he will challenge Interior Minister Sándor Pintér on the issue of public safety.