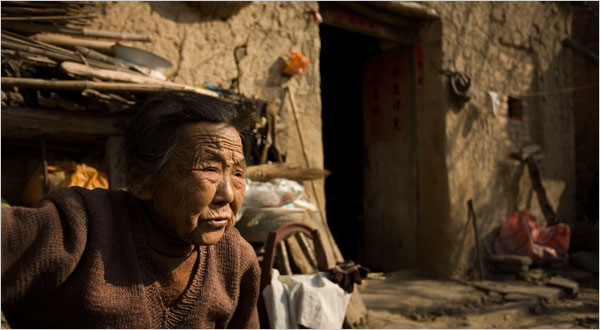 A three-hour bus ride from the shopping malls of central Beijing, Yongfengtun, a village north-west of the city, reveals the flip-side of China’s economic expansion: deepening inequality that has undermined confidence.

The farming community’s population has quadrupled in recent years, to 20,000, as migrant workers and members of the so-called ant tribe of cash-strapped urban youth poured in from across China. Grimy shopfronts advertise cheap clothing, shoes and budget mobile phone services. Dogs root through piles of rubbish on streets crowded with bicycles and pedestrians.
Advertisement: Story continues below

“Heat costs money,” he says as he kicks a pan of water for washing laundry that has frozen solid. “There is no way I could afford an apartment in central Beijing,” with rents probably 10 times higher for a comparable place, he says.

Even so, the rise of slums in the suburbs of Beijing, Shanghai and Guangzhou attest to a yawning wealth discrepancy between thousands of newly minted rich and millions of poor.

Already, China is showing levels of inequality comparable to the Philippines and Russia, according to Li Shi, who studies income distribution trends at Beijing Normal University.

Official figures show rural incomes are less than one-third those in cities, with the top 10 per cent of all Chinese earning about 23 times that of the poorest 10 per cent – a ratio that is understated, according to Li. “You can find increasing income inequality almost everywhere in China today.”

One reason is a system that blocks an estimated 150 million or more rural migrant workers from gaining access to benefits such as health care, education and pensions that are available to urban residents.

As a result, migrants are forced to save more of their wages to cover medical expenses and their retirements, Li says.

Their incomes are also being hit by higher food costs, with inflation approaching 5 per cent, and housing prices, which went up 6.4 per cent in December from a year before.

China’s Gini coefficient, an income distribution gauge used by economists, has climbed to nearly 0.5 from less than 0.3 25 years ago. The measure, named after Italian statistician Corrado Gini, ranges from 0 to 1, and the 0.4 mark is used as a predictor by analysts for social unrest.

China’s wealth gap might be wider than official statistics indicate. The incomes of better-off families are understated, says Wang Xiaolu, an economist at the independent National Economic Research Institute in Beijing.

Undisclosed income, incorporating items such as subsidised housing offered by state-run companies, could add up to $1.4 trillion annually, according to Wang. That would indicate the wealthiest 10 per cent of the population earned 65 times that of the poorest 10 per cent, versus the 23 times shown by government data.

President Hu Jintao’s government is aware of the challenge. Policies aimed at lifting incomes include the abolition in 2006 of the agricultural tax, new central and local government mandates to fund nine years of free education, improved health care and low-income housing construction .

Further narrowing of the income gap will require changes in fiscal policy, says Louis Kuijs, a World Bank economist in Beijing. Expanding government revenues beyond taxes on wages to include levies on property, as well as on income earned from capital gains on real estate and stocks, is one step, he says.

“With rising prices, people feel their quality of life has gone down,” a spokesman for Horizon says.

This entry was posted in capital and class and tagged china, crisis, p.r.c., social tension. Bookmark the permalink.