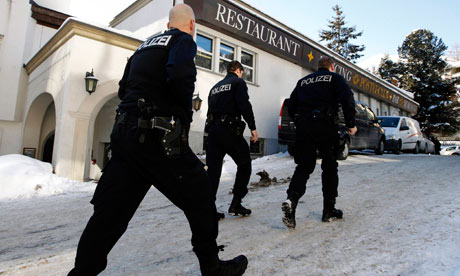 DAVOS, Switzerland — A small explosion caused some broken glass but no injuries on Thursday morning at a four-star hotel in Davos, not far from the main meeting center of the World Economic Forum.

Thomas Hobi, a spokesman for the police in the Swiss canton of Graubünden, where Davos is located, said there had been a “little detonation” in an underground storage area of the Posthotel Morosani around 9 a.m. local time. Some windows were broken but no one was hurt, he said.

The federal authorities have taken control of the investigation. In the tactical interests of the inquiry, they were disclosing nothing further, according to a statement issued by the attorney general of Switzerland.

The blast was the first sign of trouble at this year’s World Economic Forum, which has a history of attracting protests from anti-globalization, anarchist and other groups.

Shortly beforehand, someone with the online tag of “Revolutionary Perspective” claimed responsibility on an Italian activist Web site. A post with a local time stamp of 7:28 a.m. read: “We have attacked the Hotels Morosani with pyrotechnics and sugar.”

The post claimed that two explosive devices were placed in the hotel, and that the oil tank of the hotel’s heating system was contaminated with sugar. It also claimed that members of the Swiss government and representatives of UBS bank were staying at the hotel, which is located on the southwest side of the village, about a mile from the Congress Center, the main meeting site of the forum.

Authorities did not question the authenticity of the posting. But Thomas Abegglen, a spokesman for the attorney general’s office, denied that members of the Swiss government were staying at the hotel. He called the blast “a minor incident with a political dimension,” and said that the security of members of the Swiss government had not been threatened.

A spokesman for the cantonal government took issue with the term “explosive devices,” and said the detonation was caused by nothing more than “fireworks.” A spokeswoman for the forum also described the explosive as a “firecracker.”

A spokeswoman for the hotel declined to comment. The entrance to the hotel, which opened in the 19th century, is guarded; arriving guests must go through a metal detector and have their bags scanned, as is done at most of the finer hotels in Davos during the forum.

The explosion came hours before a luncheon titled “Criminals Without Borders,” which was held at the hotel as part of the forum. Among those attending were Juan Manuel Santos, president of Colombia, and Yury Fedotov, executive director of the United Nations Office on Drugs and Crime.

News of the blast also buzzed around the Congress Center, where the big names circulating on Thursday included President Nicolas Sarkozy of France and former President Bill Clinton.

As in past years, security has been extremely tight at Davos. Snipers clothed in black visibly patrol the roofs, and people arriving by train or car are carefully monitored. The Swiss army has deployed 4,000 soldiers to guard the gathering, as well as installing more than 10 miles’ worth of barbed wire and fencing and 1,000 sandbags.