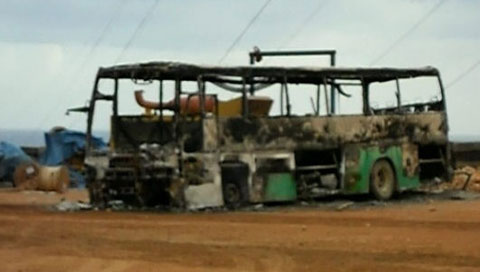 Hundreds of local residents stormed sites where Korean firms are building housing on Jan. 14 and 15, company officials said Sunday. They looted cash and inflicted upwards of 45 billion won ($40 million) worth of damage.

One Korean suffered a collapsed cheekbone after being struck by a rioter. Some 100 residents remain in a standoff with police at one site, a foreign ministry official said.

The rioters did not discriminately attack Korean firms, targeting those from China, Turkey and other countries as well.

“The Libyan government has said it will pay compensation. We will start assessing the damage and our embassy in Libya will try to help our companies receive as much compensation as possible,” Yonhap News Agency quoted the official as saying.

The rioting was apparently set off when residents misunderstood a comment by a government official, believing that he said the housing belongs to Libya, and therefore Libyans are free to live there.

Koreans working in the North African country say because it lacks housing, citizens often take shelter in construction sites before they are finished.

It was speculated the situation escalated when construction workers attempted to physically force them out.

According to an eye witness, the rioters pillaged heavy machinery, stole cash and even set fire to equipment.

After the initial wave, the witness said a much larger mob broke into the companies’ employee housing, stealing cash, laptops and other belongings.

The firms have halted construction, with its 80 Korean and 1,700 foreign employees staying in nearby facilities.