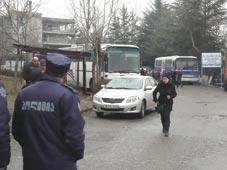 IDPs from Abkhazia and South Ossetia were evicted from their compact settlements in Tbilisi in the early hours on January 20. Police sealed off the territory of the former student’s dormitory in Bagebi district which, according to the Georgian Government had been illegally occupied by the families living there. Relatives of the evicted IDPs tried to oppose the process and enter the property but in vain. The confrontation between the sides ended with the detention of several IDPs; among them some women. Those resisting the policemen were taken to the police station. Detained IDPs face administrative fines for their attempt to enter the eviction properties resisting the policemen. Dali Petriashvili from Georgian Young Lawyers Association (GYLA) protected their rights at the court.

Dimitri Omanadze, Co-Chairman of the Public IDP Movement spoke of an illegal decision carried out by the MRA forcing the IDPs to leave their shelters by January 15. IDPs said they had been informed of the possible eviction beforehand but they hoped the process would have been delayed. Being aware that they had no other choice, IDPs left their shelters on special buses provided by the Government wondering where they would be resettled.

The former building of the Customs Department in Orkhevi district in Tbilisi outskirts was also sealed off during eviction.

According to MRA, around 10 000 families displaced from Abkhazia in the early 1990s were granted ownership of houses in the capital city while there are no more resources to provide everyone with dwelling space in Tbilisi. Therefore, IDPs from both Abkhazia and South Ossetia will have to be moved out and resettled to different villages of Samegrelo, Kakheti and Imereti regions. “IDPs could have seen all the possible places but very few of them became interested in the proposal and took this opportunity,” Iulia Kharashvili from MRA Department of International Affairs told the media stressing that the process of eviction had been agreed with the UN and NGOs.

IDPs, supported by opposition parties, held a series of rallies in recent weeks protesting against the expected evictions. They say that resettlement in the provincial regions would leave them without any source of income, because housing options in the regions, offered by the authorities, lack livelihood opportunities. Stressing that the oppositional parties have been spreading irresponsible and incompetent statements Minister Subeliani accused the opposition in “using IDPs for getting higher political scores.”

Paata Davitaia oppositional Deputy Chairman of Parliament asked the Government to immediately stop oppressing IDPs and violation of the strategy of the Georgian Government and the international conventions. “It’s doubtful that we would reclaim Abkhazia and South Ossetia after such treatment of IDPs,” Davitaia stated. Talking of the problems of the IDPs who have gone through so many troubles, General Secretary of Our Georgia – Free Democrats Irakli Chikovani spoke of “illegal and inhumane methods” against the people suffering from lots of problems for years and demanded offering “real alternatives” to those people.

IDPs are refusing to move to alternative places offered by the Ministry. With the official information released by the Public Registry, only 7 257 apartments have been legalized for IDP families instead of 20 000. Upset that the Georgian Government oppressed them in their homeland, IDPs said they would ask for shelter from US and Europe. Warning that they would use radical methods, participants of the protest rally in front of Parliament said they would build “the city of tents at Rustaveli Avenue”. The sides protecting the rights of IDPs stated they would start permanent protest rallies in front of Parliament.

This entry was posted in resistance and tagged georgia, land tenure, social tension. Bookmark the permalink.