Athens goes on security alert for trial of suspected militants 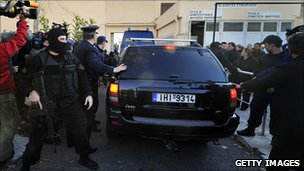 January 17
Law enforcement snipers will watch from rooftops. Motorists will be checked at roadblocks across Athens. And at the courthouse, inside a maximum security prison on the eastern outskirts of the Greek capital, hundreds of plainclothes officers will patrol surrounding streets to shield against militant attacks.

Riot police armed with percussion grenades and tear gas will also be on alert as part of the security measures planned for the trial scheduled to begin Monday of 13 suspected members of the Conspiracy of the Cells of Fire, a militant anti-authority movement known as SPF.
Get dispatches from Times correspondents around the globe delivered to your inbox with our daily World newsletter. Sign up »

“We are prepared for everything,” said Athanassios Kokkalakis, spokesman for Greece’s National Police.

The accused — 12 men and a teenage girl — are charged with terrorism counts related to a series of attacks on Greek politicians, which caused no fatalities or serious injuries. Under a new terrorism law, the defendants will be tried by a three-member panel of judges instead of a jury to avoid intimidation. Nine of the defendants, who are in custody awaiting trial, face up to life in prison if the court determines that their alleged activities could have resulted in the deaths of their targets. The remaining suspects, who remain at large, will be tried in absentia, officials said.

The militant group is tied to a November mail bomb campaign that targeted embassies in Athens, international organizations and three European leaders. None of the parcels caused serious injuries, but the mail bombs were part of what the group describes as “a new, rabid [style] urban warfare” it began in 2008 by staging a series of bomb attacks in Athens and the northern city of Thessaloniki.

In late December, at least five suspected members of the group planted a booby-trapped moped outside an Athens courthouse, blasting the building’s foundations and defacing its soaring marble-and-glass facade in an explosion so strong that locals feared it was an earthquake. No one was injured, but the blast left surrounding storefronts shattered and mangled cars strewn along side streets. Judicial officials assigned to the trial Monday were also left fretting.

The mail bomb campaign prompted copycat attacks in neighboring Italy, marking a flare-up in anarchist violence in Europe. According to intelligence sharing between Greece and Italy, both Mediterranean countries, plus Spain, have become the breeding grounds for Europe’s most militant anarchists.

According to data being compiled by the European Union’s police agency, attacks by far-left and militant anarchist groups surged during the last two years.

“With youth protests swelling across Europe, most recently in France and Britain, the looming fear is that anarchists may try to exploit that social unrest,” Europol Director Rob Wainwright, who is based in The Hague, said in an interview.

“We are trying to avert that,” Wainwright said, refusing to elaborate.

Authorities acknowledge that they remain unsure of the Conspiracy of the Cells of Fire’s goals.

“It’s a peculiar if not idiosyncratic group,” said Greece’s Minister for Citizen Protection Christos Papoutsis. “Its profile is not one of typical Marxist-Leninist thinkers or ideologues piping on a class-struggle theme, but of cliques of the disillusioned middle-class-kid-next-door.”

According to security officials, the group has evolved from a small clan of anarchist acquaintances targeting symbols of power with crude bombs to an organized network of cells with stockpiles of sophisticated gear. Its members, according to the group’s proclamations, preach “revolutionary anarchy and nihilism,” putting their individual militant wills over those of society.

Such movements bedeviled much of Europe in the 1970s and 1980s. But as separatist agendas and violent denunciations of imperialism turned passe, leftist violence simmered in Greece. It gained fresh appeal after violent student protests spawned by the police killing of a teenage boy in 2008.

In recent months, austerity measures gripping Greece and other debt-choked nations across Europe have added to the group’s fiercely anti-capitalist rhetoric.

Whatever its intentions, “there will be pressure from European governments for Greece to deal with its homegrown terror,” said Charles Bird of the Center for the Study of Terrorism and Political Violence at the University of St. Andrews in Scotland.