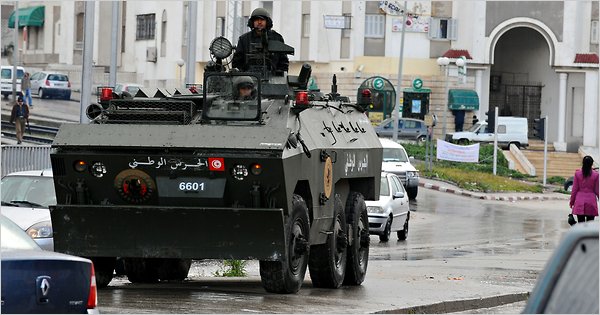 TUNIS — Clouds of tear gas floated up this city’s cafe-lined main boulevard on Wednesday as troops swarmed onto downtown streets to tamp down the first major protest to hit the capital since rioting and demonstrations began three weeks ago.

The wreckage of an ATM destroyed during recent protest violence on the main square in Cite Ettadhamen near the capital Tunis.

The government said that the country’s interior minister would be replaced over the violent clashes, which have shaken the government and left 21 dead. The government has also said it would release some of the those arrested during the recent riots, but it was not clear whether any had been freed.

Riots over poverty and unemployment stemming from the country’s dire economic situation were unleashed last month after a young unemployed man set himself on fire. The government is scrambling to try to contain the mounting unrest, some of the worst protests the country has witnessed in decades.

The Tunisian Army filled the streets around the National Party headquarters and television broadcasting facilities here in the capital on Wednesday, and security forces used tear gas to break up demonstrations near the French Embassy. Anger against the country’s leaders ran high.

“They say the people are terrorists, but they are the real terrorists,” said Ala Djebali, an 18-year-old student who had taken refuge in a train station near the embassy.

The police marched in crowds, sweeping up suspected demonstrators as businesses shut their doors and pedestrians fled. Witness said snipers fired on the crowds and that several had been hit.

“How can you fire on your own people?” said a 30-year-old business owner who declined to provide his name for fear of reprisals. “If you do that, then there is no return. Now you are a killer.”

In previous protests, riot police have used live ammunition to disperse the crowds, resulting in deaths.

In a region full of police states, Tunisia is considered by far the most repressive. Tunisian rights activists said the police have been arresting opposition figures in their homes. Radhia Nasraoui, head of a group that opposes torture, said the police had arrested her husband, Hamma Hammémi, chief of the Communist Party, who in recent days has given several interviews to French media about the demonstrations.

“He explained that the regime has lost all legitimacy so we were expecting this,” Ms. Nasraoui said Wednesday following the arrest of her husband. She showed a reporter the broken down door of their apartment. “It is kidnapping.”

Social-media Web sites are also believed to have played a roll in helping protesters to organize, and the government reportedly directed Internet service providers to provide information on accounts of individual users.

The State Department expressed concern about intrusions into the privacy of Tunisian customers of American companies like Facebook, Yahoo and Google. The United Nations secretary general, Ban Ki-moon, urged restraint and respect for freedom of expression.

On Monday, the government ordered the closing of all schools and universities until further notice in an attempt to quell the unrest.