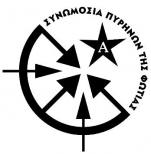 I.  “The days are coming when they try…”

We are not torturers, like the Democrats. The solution to conflicts with scumbags like Korkoneas, comes from taking law into one’s own hand. Those who felt the most the loss of their comrade A.Grigoropoulos should decide the “fate” of his murderer.
We believe that the same path, taking the law into one’s own hands, should be followed for all rapists, pedophiles, pimps, fascists and snitches.

“As revolutionaries we do not recognize any investigating authority. So we were bound to refuse to apologize to cops and interrogators, since our revolutionary position is that only before the public and our comrades do we feel a duty to promote.” (P. Argirou – G.Tsakalos members of the prisoners cell of C.C.F.)
Finishing with the issue of the judical mafia, we believe that every decent imprisoned Human for whatever reason he is “inside” must not do the “Favour” to the judges and recognize them as eligible to judge him. Because this is what they want with their “legalization”, their recognition as a superior clique of people whom the rest have to be fully accountable to. But honourable judges you should know that the expensive clothes that you got this morning from the drycleaners have absorbed the blood of thousands of people you tortured and locked in prison without a second thought. And this blood will drown you… This is why we call the criminal and political friends and comrades who choose to walk with dignity as a guide to refuse to recognise their inquisitors in any way. There is not only one way, but many. From silence against interrogators and judges, from the refusal to appear in court, by converting the trial into a public forum for the dissemination of revolutionary values, to the attack in the courtroom against the “honorable judges” by spitting, swearing, shouting and throwing objects, glasses, coffee etc.
To get them behind a protective window, for them to move around with bulletproof vests accompanied by the masked cops of the anti-terrorist.
Our first appointment is therefore on January 17th. We will be there NEXT to our brothers the members of the prisoners cell of C.C.F. and to those who had the dignity in this adventure to hold their heads up high. We’ll be there with our soul, our hearts and our minds. Because otherwise, we are looking for intense passages to take back our comrades and to be together again tomorrow in the struggle, the NEW URBAN GUERILLA WARFARE.
Because our day will come…

A while ago a vast mobilization took place within prisons with the participation of many prisoners in the abstention of prison food. The fact passed as “insignificant news” in the media, some domestic disputes between prisoners did not let things expand and many were met with with disappointment, while the leadership of the ministry, with a smart strategic move, gave partial amnesty to disciplinary actions so that “the incident be considered final …”
We as the Revolutionary Organization Conspiracy Cells of Fire will always support the struggle of prisoners and their mobilizations. We understand the difficult circumstances under which thousands of people are tortured every day. We will not comment on the demands of the prisoners considering them in advance selfevident and obvious, because they are in the direction of a struggle that is the most important for humans, the struggle for freedom and dignity. But we do not forget that “any improvement of the conditions, will not fundamentally change everyday life, because the deprivation of freedom alone is a constant punishment ” (V. Stefanakos prisoner). Even these scumbags, the directors of prisons, complain that the vans come back from the courts loaded with 300 to 400 years of prison time. So this is the mirror of our civilized society, a vast warehouse of souls in pigsty conditions. Until when will we tolerate people being released from prison in coffins (the Greek prisons have the highest rates of suicide). Until when will we tolerate a handful of sub-humans to judge us with laws written by the hand of our executioners and our exploiters.
But in relation to the mobilizations in the prisons it’s better that we say two words in the language of the prisoners without fancy phrases and policies. We know that everyone inside thinks that they have been wronged by society. But instead of doing an illegalist catwalk and looking to find a hit of smack to take, snitching on the person next door, how to divide the community of the wing or the cell, they take a look around and see that prison depends on him. He fixes the plumbing, electrics and all general building work. He cleans, cooks, to keep the prison open. Its him with his submissive attitude that binds the others around him, turning himself into a cop of the system.We know very well that the greatest threat to freedom is not its violent deprivation through captivity, because the prisoner can fight to win it back, but the real threat is the loss of the passion and appreciation you have for it.
In prison what kills even more than smack is habit. The habit of wearing invisible handcuffs on your mind, the habit of the exercise yard, the surprise checks and transfers, the visits behind plexiglass, the permanently on television…
Koridallos for example, the largest prison in the country has about 2500 prisoners maybe more, while the guards on duty never exceed 50 even in an open prison. If all of these inmates refused to cooperate with the 50 individuals, refuse to play the game with the carrot and the whip, then they could tear down the prisons with their nails overnight. A refusal therefore of cooperation and sabotage their procedures. We believe that there is already a struggle that has started long ago without us. From the bomb on the director of the prisons of Corfu to the bomb to the Director of Alikarnassos prison and from the shooting of the prison employee in Koridallos to the beating of the director of Avlona prisons, there is anger, there is anger, there is a memory…Prison is the stone that while the builder of legitimacy throws away as useless, can become the cornerstone for building a new world. The decent criminals and political prisoners can combine their experience and transform prison into a workshop of producing knowledge and conscience, to make the experience of lack of freedom a stubborn struggle, make themselves the spark in the powder kegs of the prisons. We already know that the struggle against prisons is a struggle for life that knows no frontiers and nations. The universal language of violence and deprivation of liberty has written its own history on the bodies of prisoners. Recently, 83 prisoners died in the prisons in Chile. In retaliation, the anarchist group“commandos of vengeance for December 8″ attacked the technology and computer department of the cops for the dead in San Miguel prison sending a clear message that in this struggle no one is alone.“cages do not get better, they get destroyed. For the end of this, and every other society.” (Monica Caballero, anarchist prisoner in Chile).

III. From Theory to Practice.
Wanting to coordinate theory with practice, and to send our Respect, Faith and Friendship to our brothers P.Argirou, G.Tsakalos and H.Hadjimihelakis of the prisoners cell of C.C.F., to anarchist revolutionary P.Massouras, anarchist K.Karakatsani, the antiauthoritarian-arsonist G. Skouloudis and the 4 wanted comrades who are prosecuted for the same case, the honest and authentic anarchist fighter G.Dimitrakis, the dignified P.Giannou and to the brilliant criminal minority who do not bow their heads and walk with dignity as their guide we chose and decided to strike the Administrative Courthouse of the judical mafia. We mapped out the area, we calculated the distance to the General Clinic so that not the slightest thing happen, watched the movements and shifts of the special guard post between the Administrative court and the Appellate court, timed the blackout that prevails at 7:15 in the morning when the streetlights go out, the frequency of the route of the pigs of the D.I.A.S. group around the target, we expropriated the vehicles we needed and we went on the attack. We formed a fully operational team more than ready to attack any involvement. Two support vehicles supervised the court both before the planting of the motorbike with the bomb, and at the final stage of its parking, where one of the two vehicles received the comrade who drove the motorbike. The positioning of the support team was such that they were able to immediately subdue the guard in the rare case that he realized something, but also to surprise any police variable force (e.g. control of the rider by the motorbike of the DIAS or by an accidentally passing patrol car). Both our position and our weapon superiority would be enough to disengage  and we could get away unscathed.
As we have said before when talking about operational descriptions of some
of our strikes, we do so to demystify the technical sacrosanctity of power.
We believe that anything is possible provided that there is the will and organization. We are last who would demote a revolutionary project to a military logic of prevalence of the “fittest”. The issue for us is not who will be the most disciplined soldiers, the most talented officers, this draws the revolution to a spectacular background, abstracting it away from daily life.
What we simply say to the enemies of freedom is that whatever you do we will continue to strike you, to disturb your interests, bother your peace, to affect your certainty and your safety.

What are we selling? Nothing.
What do we want? Everything.

This entry was posted in resistance and tagged anarchists, greece, low intensity conflict. Bookmark the permalink.