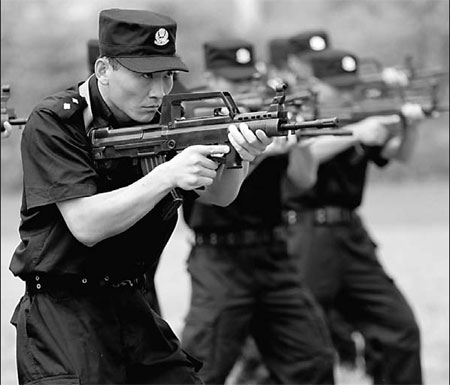 According to the introduction, occupying a total floor area of 160,000 square meters and construction area of 29,700 square meters, the base locates at Hetiankeng area in Futian district in Shenzhen, with mountains surrounding its three sides. The base contains executive office building, comprehensive building of SWAT cop, comprehensive building of tactical training, marine affairs imitation practice and other functional courts, which is a modernized tactical training base with complete facilities, high technological content and high specialization in China, representing the Chinese police’s tactical training features and style. The establishment of the base has made reference to the management mode of the integration of police force and tactical training of the Occident and Hong Kong, aiming at regulating the police force’s specialized technology of tactical training, unifying management mode and cultivating the police’s ability of dealing with emergency.

After the ceremony, Li watched the report drills of the SWAT cop, including anti-riot formation exercise, sniping tactical shooting and guarding tactics and then visit the training pavilion and exhibition of SWAT equipments of the tactical base.