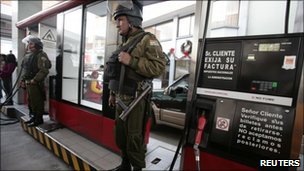 Bolivia has announced a sharp rise in the price of fuel, with petrol and diesel going up by more than 70%.

The main transport union called an indefinite strike in protest.

The state could not go on subsidising prices when so much fuel was being smuggled abroad by profiteers, Vice President Alvaro Garcia Linera said.

The government said it would compensate for the fuel price rise by increasing public sector wages and freezing utility bills.
‘Tough test’

“We are bringing fuels up to international price levels,” Mr Garcia said on Sunday.

“State subsidies cost $380m (£246m) a year; we don’t want this to continue. We buy expensive diesel fuel and sell it cheap.”

Low-octane petrol prices will now rise 73%, while diesel will go up 83%.

The vice president said that the move was aimed at stimulating energy companies to produce more oil and to import diesel and gasoline.

Fuel prices in the impoverished South American country had been frozen for almost a decade.

To mitigate the impact of the price hike, the government said it would increase public sector salaries above the inflation level and would also freeze utility bills.

It also said it would not raise prices on the natural gas that is converted into fuel for vehicles or domestic liquid gas, which many Bolivians use in their homes.

But anger in the country is already growing.

The Drivers’ Confederation, which groups bus and lorry operators, called an indefinite strike starting on Monday.

The sudden embracing of free market principles will be a tough test of support for the country’s left-wing President Evo Morales, correspondents say.