ON THE PRISON REBELLIONS IN BABYLON 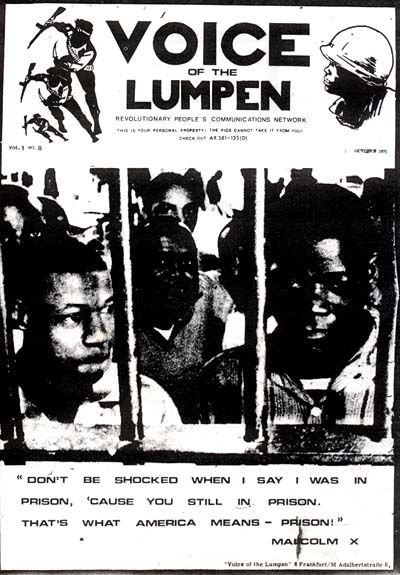 The massive and bloody rebellions inside the prisons of Fascist-Imperialist Babylon are an integral part of the overall struggle of oppressed people both inside the United States and throughout the world. Those held in side Babylon’s prisons are human beings who have been victimized by the sick, racist exploitative, and murderous capitalist social, political, and economic system into which they were born and in which they are trapped.

The swiftly rising political consciousness of the American people generally has also manifested itself inside the prisons, for those in prison, above all others, see the vicious system of oppression in all its nakedness, its cruelty, and inhumanity.

In recent years, the prisons officials have adopted the policy of weeding out and identifying prisoners who show either leadership qualities or capacities for political analysis or whom they think will join in revolutionary struggle once they are released from prison. Once identified, these prisoners are systematically repressed, often murdered either by prison guards or by other prisoners who become lackeys for the prison authorities in return for special favors, bribes, or in response to threats, pressure, or fear.

This policy of political repression of prisoners has turned the prisoners into political prisoners and transformed the prisons themselves into concentration camps. Even though most of the prisoners were not directly involved in political activity before they were sent to prison, they become politically conscious inside the prisons themselves and then they begin to see the political aspects of their predicament. Their natural response is to organize themselves into political machinery in order to pool their strength in their just demands for the justice that they are due and which they have been denied. Just as human beings put up fierce and unyielding struggles once they became aware that they are oppressed; so the prisoners become fearless and uncompromising fighters for their freedom. When they strike their blows, from behind the prison walls, they are making a profound contribution both to the struggle for the American people against the diabolic system of oppression and to the struggles of the people of the world who are the victims of the overseas extensions and expansion of the Empire of the Oppressor and Exploitation of which the United States is the head.

All those outside the prison, both within the United States and throughout the world, who believe in the possibility of a new world free of oppression and exploitation within civilized societies that nature human life instead of destroying it, have a clear and concrete duty to rise up in support of these prison struggles and express their indignation towards the Fascist-Imperialist rulers of America who are viciously putting down these rebellions in cold blood. Prisoners by the dozens are being slaughtered, maimed for life and brutally tortured by the prison officials in desperate attempts to stamp out the rebellions. But the savage repression mounted by prison officials can be bechecked upon the rulers of America that their brutal treatment of prisoners will not be tolerated.

Over the last few years, the key focal point of the struggle of the Afro-American people has been shifting more and more to the two most repressive and brutal institutions of American society:

The reasons for this shift of focus are clear. Within both the prison system and the U.S. Military Establishment thousands upon thousands of young Afro-American men and women are pulled together in a highly centralized fashion. They are gathered together from every corner of the U.S., yet they have one thing in common: they come from the bottom of society, from the most oppressed class, a great many of them coming from the Lumpenproletariat, and they have suffered the most as victims of the vicious racism, repression, and economic exploitation.

When these people arrive, by force, both to prison and into the Military, they see the contradiction of American society in their most blatant form. In prison, they fall into the hands of inhuman, sadistic beasts, who daily violate the most basic and elementary principles of justice and civilization. In the military, they are ordered to fight to protect the so-called democracy has been oppressing their people for hundreds of years in the most brutal and savage manner. All of this becomes absolutely clear in both the prisons and the military. The natural response to this contradictory and untenable situation is to revolt.

As the situation develops, the identical nature of the predicament of those trapped in the prisons of Babylon and the Military Establishment becomes ever more clear. In both cases they are directly and immediately under the gun, which is used crudely and blatantly to control and contain them. If the prisoners do not like it, and revolt, the military is sent in to suppress them with guns. If the Afro-Americans in the military refuse to do this dirty work for the rulers of America, then they themselves are thrown into prison or otherwise liquidated.

The struggle of Afro-American prisoners has already burst into full maturity, and exactly the same situation is coming to a head inside the U.S. Military, and each violent encounter that occurs, whether inside the prisons or inside the Military, feeds the flames to a higher pitch. It is important to view all of these separate incidents as part of an overall process. It is the slowly widening of the war of liberation being waged by the Afro-American people, and the war of fascist repression being waged against Afro-Americans by the rulers of Babylon. We are fully determined to carry our struggle through to final victory, and no amount of repression by the fascist-imperialist ruling class can make us give up our struggle or slow down in the least. We will also avenge the deaths of our brothers and sisters who are being slaughtered by these pigs.