280 Palestinians Kidnapped in November by Israeli Occupation Forces, Including 43 Children and Three Women 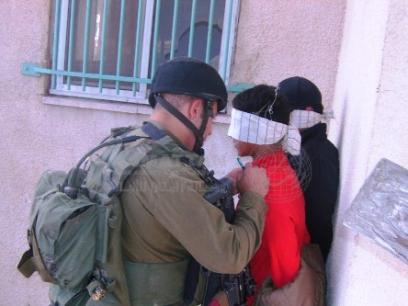 The Higher Committee for Supporting the Detainees stated that Israeli occupation forces kidnapped in November 280 Palestinians, including 43 children and three women, in several areas in the occupied West Bank and in occupied East Jerusalem.

Two of the kidnapped residents are elected members of the Palestinian Legislative Council. The two are Nayef Rajoub from Hebron, and Mahmoud Al Ramahi from Ramallah.

The Committee stated that soldiers kidnapped a 55-year-old woman identified as Shaheera Borqan, from Hebron. It considered the kidnapping of Borqan as an Israeli illegal policy meant to blackmail her two detained sons.

Furthermore, soldiers kidnapped Abdul-Qader Masalma, 45, from Hebron, despite the fact the he is paralyzed due to extreme torture practiced by Israeli interrogators during a previous arrest; he spent seven years in prison.

In related news, soldiers broke into the Al Ramla Prison Hospital, were 25 detainees are hospitalized, and searched it under the guise of searching for communication equipment.

Referring to the health conditions of several sick detainees, the report revealed that detainee Mohammad Al Saleeby, 62, had to be transferred from Majiddo Prison to the Al Affoula hospital due to the seriousness of his condition.

Detainee Imad Al Masry, from Aqaba town near Jenin, is in urgent need for medical
attention as he suffers a kidney disease, sharp pain in his spine, right hand and teeth. The prison Administration is denying him the right to medical treatment.
Several detainees contracted a skin disease in a number of detention centers but were not provided with any medical treatment.

Meanwhile, the detainees in Shatta prison refused their visitation rights as the soldiers insisted to cuff and shackle them during visitation time.

Soldiers at the Ramon Prison attacked the families of several detainees injuring the wife of detainee Ala’ Qfeisha, and the mother of detainee Lo’ay Qfeisha.

Detainees at the Nafha Prison held a one-day hunger strike to protest repeated attacks and searches to their rooms.

Detainee Shadi Abu Al Hasseen declared he is resuming his hunger strike until his release, especially since he ended his 7-year term but was never released.

Detainee Jamal Abu Al Haija, a Hamas leader in solitary confinement at the Ayalon Prison, and detainee Aahed Ghalama, a leader of the Popular Front for the Liberation of Palestine, started a hunger strike demanding better living conditions, and visitation rights.

Detainees in all solitary sections at the Al Jalama prison conducted a hunger strike demanding an end to their solitary confinement that started three months ago.

There are more than 8000 detainees, including hundreds of children and women, imprisoned by Israel. At least 27 of them were kidnapped and imprisoned more than 25 years ago.