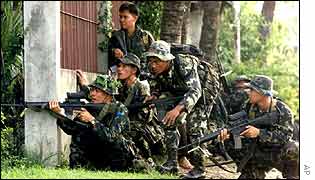 Its all about teamwork

MANILA, Philippines – The Philippines, a long-time US ally and former colony, said it will sign a logistics supply deal with China to source military equipment to combat domestic security threats, including from Maoist rebels.

General Ricardo David, Chief of Staff of the 130,000-member Armed Forces of the Philippines, will fly on Tuesday to Beijing, where he will meet senior defense and army officials and also tour military facilities, the Philippine military said.

David will sign a defense logistics deal with his counterpart in the People’s Liberation Army (PLA), with talks expected to cover regional security concerns, including tensions in the Korean peninsula and the peaceful resolution of disputes in the South China Sea, where Beijing and Manila have competing claims.

“I would suppose this will start the influx of logistics coming from mainland China,” military spokesman Brigadier-General Jose Mabanta told reporters on the planned deal.

The Philippines has one of the weakest militaries in the Asia-Pacific region, in part relying on second-hand aircraft, boats and assault rifles from the United States, its closest security partner and former colonial ruler.

“I don’t think there will be any political implications,” Mabanta said when asked about the likely U.S. reaction. “The Philippine Armed Forces really lack funds and equipment and is ready and willing to accept equipment and much-needed resources from any donor country. This includes, of course, China.”

Last year, a US congressional report warned of China’s “soft power”, of expanding its influence in the region through billions of dollars in development assistance and investments, particularly in the Philippines, Cambodia, Laos and Myanmar.

In August, US military officials said Chinese assertiveness in the South China Sea was causing concern in the region.

China has previously donated engineering equipment, such as graders and bulldozers, which the army used to build roads in rural areas where the Maoist New People’s Army (NPA) is active. It has also offered to sell artillery, helicopters and boats.

Since 2000, Washington has donated more than $500 million of military equipment and supplies to Manila. It has also provided training and advice on countering Islamic militants in the south.

The United States has also funded assistance to poorer rural communities to check the spread of NPA influence and control.

The Philippines has a modernization fund of about $150 million to upgrade transport aircraft and combat helicopters to fight Muslim separatists and Maoist guerrillas.