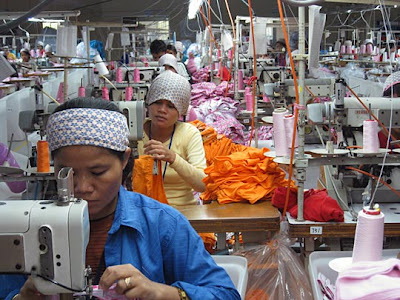 Unions were preparing to issue demands to the factories to reinstate the 799 sacked workers by Dec. 15 or face legal action and possibly more strikes, which could further disrupt a sector that is a big currency earner for the impoverished country.

“We will take action in accordance with the law and we are trying to avoid a strike,” Kong Athit, deputy president of the Coalition of Cambodian Apparel Workers Democratic Union (CCAWDU), told Reuters.

“The government and the courts have already ordered that these workers be reinstated, so these dismissals are illegal,” added Kong Athit, whose union represents 40,000 workers.

Those sacked were among the estimated 210,000 garment workers — about two-thirds of the sector’s workforce — from 95 factories who took part in the September strike to demand better working conditions and a wage increase to $93 a month from $56.

The strike was halted after three days when the government agreed to hold more talks to avoid damage to the industry, which is Cambodia’s third-largest foreign currency earner after agriculture and tourism.

Garments also provide a vital source of income for rural families, and the sector is credited with helping to reduce poverty in a country where about a third of the population live on less than $1 a day.

The country’s garment exports rose 12 percent in the first half of 2010 from a year earlier, hitting $1.25 billion, according to the Economic Institute of Cambodia, an independent think tank.

Worker disputes this year in China, mostly at foreign-owned factories, have raised questions over whether other low-cost Asian manufacturing centres would also have to pay higher wages as their workers became more assertive.

This entry was posted in resistance and tagged cambodia, repression, strike, worker resistance. Bookmark the permalink.