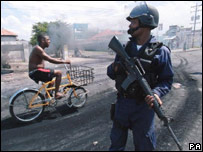 NATIONAL Security Minister Dwight Nelson yesterday bemoaned the “high level” of extra-judicial killings across the island, some of which he said were “too blatant” and stopping just short of describing them as executions.

“There are some very blatant incidences, let me put it that way. There are others [in which] there are a lot of grey areas,” Nelson said.

“When incidences of police killings get to a high a level as we are at now, it is bound to raise questions”

“The incident in Negril, for example, is one where you have to train your credibility to understand what really took place,” added Nelson.

The security minister made the statement during an interview with the Observer concerning recent fears raised by the human rights group Jamaicans For Justice (JFJ) that there could a record number of extra-judicial killings by year end.

The case in Negril, Westmoreland, to which Nelson referred is the killing of guest-house operator Fredrick ‘Mickey’ Hill, who was reportedly shot by masked police personnel from the Kingston-based Mobile Reserve.

Eyewitnesses have said that Hill was unarmed and did not pose a threat to the police. The Independent Commission of Investigations is probing the matter.

JFJ earlier this month raised its concern on the heels of a United Nations report detailing a string of human rights issues that the country needed to address, chief among them extra-judicial killings.

According to figures from JFJ, more than 270 fatal shootings by law enforcement officers were reported across the island up to November 6. Since that date, more have been reported. This does not include any of the more than 73 persons killed during the operation by the security forces in West Kingston in May while they searched for former fugitive Christopher ‘Dudus’ Coke, who is now awaiting trial in the US on drugs and gun-running charges.

The record for extra judicial killings was set at 340 in the early 1980s. That period was marked by civic and political unrest and high fatalities of civilians at the hands of special police patrols.

Yesterday, Nelson said that he was aware of the “strident calls” for a reduction in the number of extra-judicial killings. The security minister said there was ongoing dialogue with the Police High Command to this end.

“When incidences of police killings get to a high a level as we are at now, it is bound to raise questions and when these questions are raised, it is incumbent on me, as minister, to ensure that I have meaningful discussion with the police as to how the matter need to be address,” said Nelson.

“It’s really a matter of training a matter of approach and a matter of tactic and operational strategy as far as the police are concerned. It’s just a split second when you are confronted by a gunman for death to occur either way,” he said.

This entry was posted in state security, war, war on drugs and tagged jamaica, just another police murder, state terror. Bookmark the permalink.