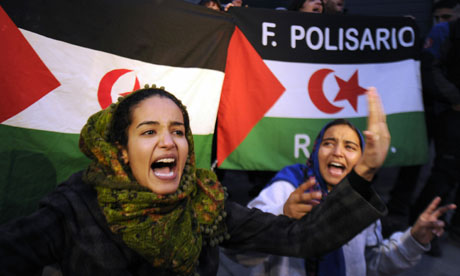 A burnt-out pressure cooker lies in the dirt, surrounded by a mess of trampled teapots, trainers, pillows and bowls. A stench rises from wrecked cars. Photocopies of identity papers litter the ground. Here is a document in the name of Moh Mouloud, born 1946, registered by the identification commission of the UN peacekeeping mission in Western Sahara (Minurso) as a member of the Aït Lahcen tribe.

Last Thursday, this was all that remained of the Sahrawi camp evacuated by the Moroccan authorities three days earlier. A special permit had to be obtained to enter Gadaym Izik camp, set up on 10 October in the desert 12km from Laayoune, the capital of Western Sahara occupied by Morocco in 1975.

The town bore the brunt of the response to the break-up of the camp, which sheltered as many as 15,000 refugees. Cars, the court, shops and banks were torched. The fighting took a heavy toll, with 10 police officers killed and 212 injured, the interior ministry said. The Polisario Front rebels reported 11 civilian deaths, 723 injured and 159 missing.

The Wali (regional commander) Mohamed Jelmous supervised operations by 1,400 auxiliary forces and as many field police, equipped with water cannons. He acknowledged that two civilians had died. “The security forces had orders not to use firearms, because many women and children were being deployed as human shields,” says Mohammed Khabbachi, the ministry spokesperson.

“I saw no sign of any spent cartridges,” says Hany Abdel-Aziz, special representative of the UN secretary general, who heads the Minurso mission set up in 1991 with 203 international military observers.

Maïlimnin was at the camp with her 34-year-old son. “At about 6am,” she said, “a helicopter flew over the camp and the loudhailer said we had to leave. The police moved in immediately, using teargas and water. They started knocking down the tents and hitting people with their sticks.” Her son, she said, was handcuffed and arrested. “I have had no news of him since.”

Jelmous said: “The gendarmes made 68 arrests, the police about 100.”

The unrest is rooted in long-term discontent. The camp residents are largely unemployed, waiting for welfare promised years ago. What made matters worse, said Jelmous, was the immediate aid given to 1,650 Sahrawis, recent arrivals from Polisario refugee camps near Tindouf, Algeria.

The Wali said: “Inside the camp separatist militants and former convicts took control of the population, leading to a breakdown of law and order.” Some Sahrawis denied these allegations, but many are afraid to speak out for fear of reprisals. “There is a climate of fear,” said Bachir, a militant.

Ghalia Djimi, deputy head of the Association of Victims of Civil Rights Violations by the Moroccan state (ASVD), said: “It was a peaceful demonstration. For the last 35 years the indigenous population has paid a very high price for this conflict, in terms of social exclusion, divided families and the collective punishment of a whole community.” Countering such arguments, the Moroccan authorities detail the resources invested in the area.

The Moroccans, however, acknowledge that the recent fighting marks a new phase. “Before we just had to cope with people throwing stones,” says Jelmous. Mrs Djimi concurs: “That Monday it felt like war.”