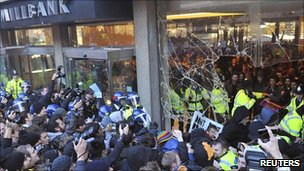 Police investigating violence that flared during last week’s student fees demonstration in London have released images of 13 people they want to trace.

Dozens of people were hurt when 2,000 protesters split from the march to surround the Conservative HQ, where windows were smashed and fires lit.

The 13 were filmed on CCTV cameras or by officers during the stand-off.

Separately, a teenager was arrested on suspicion of attempted murder after a fire extinguisher was thrown at police.

It had been dropped from the roof of the building, where a number of protesters had gathered.

A total of 58 people have now been arrested in connection with the violence.

Windows were smashed and missiles hurled at police during the demo Police preparation for the demonstration was criticised after just 225 officers were assigned to oversee the march.

Senior officers were later forced to draft in 225 reinforcements to deal with the four-hour stand-off, which saw missiles hurled at police and graffiti daubed on walls.

Student leaders have criticised those who took part in violence, saying it detracted from the peaceful protest attended by an estimated 25,000 people.

They are angry at government plans to allow universities to charge up to £9,000 per year in tuition fees.

Meanwhile, a website which published advice to protesters on how to avoid arrest has been closed down after Scotland Yard detectives told its hosting company it was being used to “pervert the course of justice”.

A letter from Acting Det Insp Will Hodgeson asked for the Fitwatch blog and IP address to be suspended for 12 months.

It said: “The website is providing explicit advice to offenders following a major demonstration in central London.”

The high-profile website was set up three years ago by veteran protesters Emily Apple and Val Swain in response to police forward intelligence teams (Fit) teams photographing the activities of suspected extremists.

Last week it published an anonymous post advising how to evade arrest, with instructions on destroying potential evidence, including clothing and distinctive jewellery.