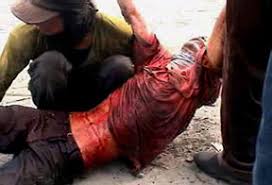 Six years after the Hacienda Luisita massacre on November 16, 2004, no one has been made accountable for the killing of seven protesters at a rally on the vast tract of land owned by the Cojuangco side of the family of President Benigno Simeon Aquino III.

In a press statement issued on Tuesday, the leftist umbrella group Bagong Alyansang Makabayan (Bayan) claimed that “six years after the November 16 massacre, not one police, mlitary or civilian official has been made accountable or has been convicted.”

Bayan claimed that “the Office of the Ombudsman has sat on the case and no significant results have been made in achieving justice for the seven who died at the picket lines.”

According to Bayan, on the sixth anniversary of the massacre, the farmers of the 6,435-hectare plantation estate “demand land and justice. They deserve nothing less.”

President Aquino among those charged

Months after the massacre, the relatives of the victims filed multiple murder charges with the Office of the Ombudsman against more than 50 soldiers and civilians allegedly involved in the massacre, among them was Aquino, who was a Tarlac congressman at the time.

In 2008, the Ombudsman decided to drop the charges against all civilians charged in the case and prosecute only the military men who allegedly dispersed the picket line.

The case against the soldiers remains pending before the Ombudsman up to this day.

Malacañang distancing itself from issue

Meanwhile, Presidential spokesman Edwin Lacierda said Malacañang is distancing itself from the Luisita issue because the Supreme Court is still hearing the case on the land’s distribution.

“Asa Korte Suprema po ‘yung kaso na ‘yon so it’s subjudice right now,” Lacierda said in a press briefing on Tuesday. “It will now be up to the Supreme Court to resolve the matter on the Hacienda Luisita.”

Aquino’s relatives, the Cojuangcos, own most of Hacienda Luisita. Aquino, however, has divested himself of his 1-percent stake in the corporation and has not been active in his family’s handling of the plantation.

Remembering the day of the massacre

Meanwhile, according to a report of Sherrie Ann Torres on QTV Balitanghali on Tuesday, the people who died in the Luisita massacre were “martyrs.”

Before the massacre, layoffs then a strike

More than a month later, on November 6, 2004, almost all 5,000 members of the United Luisita Workers Union (ULWU) and 700 members of Central Azucarera de Tarlac Labor Union (CATLU) staged a protest against the mass retrenchment.

On November 16, 2004, violence erupted between the protesters, the police and military forces.

At least seven people were killed and 121 were injured, 32 from gunshot wounds. This incident eventually became known as the “Luisita massacre.”

Bayan said land reform is still a big issue in the country despite the Comprehensive Agrarian Reform Law.

“Land reform is a question of social justice. It is at the heart of the conflict in Luisita. That thousands of hectares of land can be controlled by just one family is a throwback to feudal times. The farmers of Luisita demand land and justice. They deserve nothing less,” Bayan said on its website.

Bayan added that the massacre is a reminder of the failures of the Philippine justice system and the climate of impunity that has prevailed in the country.

Bayan also said the anniversary of the Luisita massacre “highlights not just the human rights violations but also the fundamental problem of land monopoly which was the root cause of the agrarian unrest in the hacienda.”

“The question of whether to distribute land or mere shares of stock remains pending with the Supreme Court,” Bayan said.

“The Aquino administration has not moved to stop this maneuver. The administration’s silence on the compromise deal objectively aids the maneuvers of management,” Bayan added.

Stock instead of land

The Supreme Court has yet to rule on the validity of the hacienda’s Stock Distribution Option (SDO) agreement, which gave farmers shares of stock instead of land.

The SDO deal was forged in May 1989, but the Presidential Agrarian Reform Council (PARC) ordered its revocation in December 2005. The Cojuangco-owned Hacienda Luisita Inc. appealed the order to the Supreme Court in February 2006, and months later, the court issued a temporary restraining order in favor of HLI.

A compromise agreement between the hacienda’s owners and majority of the farmers was signed in August this year in favor of the SDO scheme, a few days before the high court started proceedings to hear oral arguments for the 1989 case.

The high tribunal has formed a panel to mediate between the parties, but the mediation talks hit an impasse last September.

After 21 years of waiting for a decision on their right to own land, the farmers of Hacienda Luisita have appealed to the Supreme Court to speed up the resolution of the case.

“It does not matter how that decision will go as long as the Supreme Court performs its bounden duty to render a decision with dispatch. The Supreme Court may decide which way it wants to decide as long as it should decide now in order to spare us from the torment of waiting far too long,” said the farmers.

AMBALA lawyer Jobert Pahilga said the farmers are not giving up the fight and were merely criticizing what they perceived as undue delay in the resolution of the case.