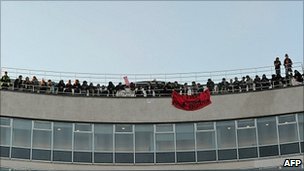 Police have made another arrest in connection with violence which broke out during the tuition fee protests in London on Wednesday.

A Met Police spokesman said a 17-year-old boy was being held on suspicion of violent disorder and was in custody at an east London police station.

It brings the total number of arrests since the demonstration to 57.

On Friday, a 23-year-old student held after a fire extinguisher was thrown from a roof was released on bail.

The man, who comes from Reading and studies at Anglia Ruskin University, in Cambridge, was questioned on suspicion of violent disorder.

A group emerged on the roof of 30 Millbank, in central London, during a protest over student fees on Wednesday.

Demonstrators surged into the building, which is the Conservative Party’s headquarters.

Windows were smashed, fires lit and missiles hurled at police.