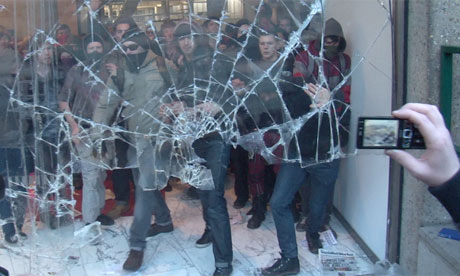 The claim from today’s protesters that their occupation of the Tory party’s headquarters was “just the beginning” is unlikely to be a hollow threat.

Since the financial took hold in 2008, police have been preparing for potential civil unrest on a scale not seen since the poll tax riots in 1990.

Widespread resentment over the coalition government’s austerity cuts has added to concern that the UK may be about to experience the kind of unruly demonstrations that have taken hold in France, Spain and Greece.

But today’s protesters are unlikely to repeat such mass confrontations. Today’s “action” was notable because it caught police unawares. Protesters had deliberately kept their plans quiet, and used the cover of a mass demonstration to launch a breakaway group with a specific target.

They organised themselves using text messages and Twitter, with many in the crowd knowing what was about to happen long before police did. Every second of the demonstration was recorded on mobile phones, with footage instantly uploaded to YouTube.

The tactic of small, co-ordinated groups targeting high-profile buildings echoes the Vodafone protests by activists from UKUncut, a group claiming the company has avoided £6bn in tax – which Vodafone denies. Activists have closed dozens of mobile phone stores across the UK by staging sit-ins.

Sam Baker, a UKUncut activist who was at today’s protest, said more high-profile campaigns could be expected “in the next couple of weeks”, and similar methods would be employed.