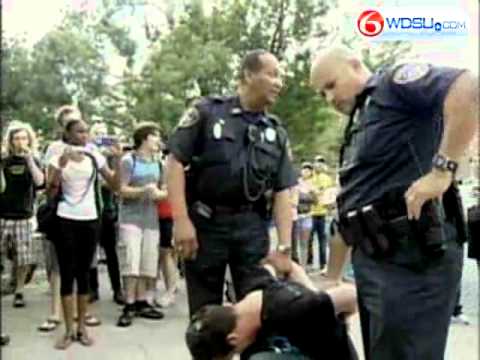 Hundreds of college students and a strong police presence are expected at Wednesday’s “Rally for Higher Education” at the State Capitol to protest state budget cuts to schools.

State Police Col. Mike Edmonson said Monday he has concerns that some fringe groups with “anarchist” associations could attempt to disrupt the protest.

The overall coalition is being dubbed “Education NOW!”

The rally is scheduled to begin at 11:30 a.m. Wednesday on the State Capitol steps. Student speakers and music are expected.

“Students are not apathetic,” said LSU senior Bradley Wood of the LSU Proud Students group, which organized a recent jazz funeral for higher education on campus. “We are very concerned about what’s going on.”

UNO senior Max Gaudin of the Save UNO Coalition said several student organizations are organizing bus transportation to the rally.

“We’re going to get people excited,” Gaudin said, noting that they want to voice student frustrations about budget cuts to legislators and the public.

He said there are concerns about certain New Orleans-based groups, like “Occupy Louisiana,” which claims the motto, “Resist, Strike, Occupy!” causing some disruptions.

But Gaudin said students leaders have talked to such groups and that there should not be any problems.

“We’re not expecting any kind of violence,” he said.

In early September, student protests at UNO resulted in the temporary occupation of two buildings, a scuffle with campus police and a few student arrests. Occupy Louisiana was involved.

Edmonson also cited a fracas that broke out in April in New Orleans in association with the Southern Republican Leadership Conference, where some groups with anarchist ties protested.

He said the goal is to make sure everyone is allowed to peacefully protest and rally.

The State Capitol, except for the observation deck and other areas closed for construction, will remain open, he said.

“We’ll have enough (security) to control the crowd,” he said. “But I don’t want to make it look like a police state.”

Participants should park in the River Road parking lot adjacent to the railroad tracks across from the Pentagon Barracks. Buses should unload on Spanish Town Road at Fourth Street, according to the State Police.