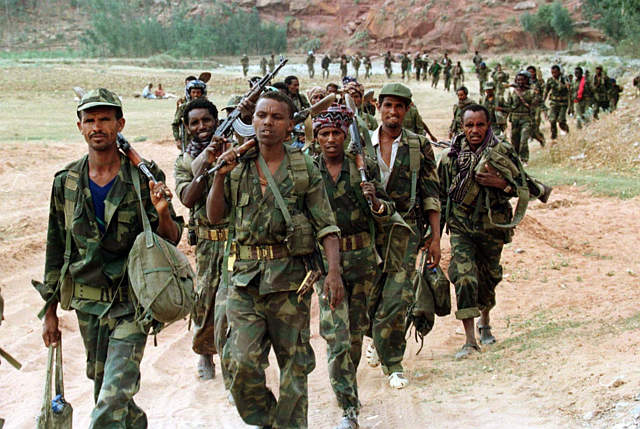 Human Rights Watch has just released an over 100-page “human rights” report on Ethiopia that whitewashes the crimes against humanity and genocide being committed by the Ethiopian regime.

In the last 10 years, the Meles Zenawi led government of Ethiopia has committed the following war crimes and crimes against humanity on both the Ethiopian people and their neighbors;

2) The 2006 invasion of Somalia, with tens of thousands killed and over a million refugees.

3) The genocidal program of counterinsurgency and blockade of food aid during a series of record-breaking droughts in the ethnically Somali, Ethiopian Ogaden region. Even the truth challenged Enough Project used the term “scorched earth” to describe the rape, murder, mass murder, theft of cattle and grain and the burning of homes and crops that is carried out every day by Ethiopian troops in the Ogaden.

Almost none of this made its way into the HRW report.

There are many other examples of crimes committed by the Ethiopian regime not raised in the report, including the regimes counterinsurgencies in the Oromia and Tigray regions as well as the ethnic cleansing carried out in the western region of Gambella.

The HRW report on Ethiopia mentions the 99.6 percent election “victory” the Meles Zenawi regime declared this year, but doesn’t expose the 500-plus protesters shot dead in the streets and over 50,000 thrown into concentration camps following the previous election in 2005.

Ethiopia itself receives, according to recent reports, some $6.7 billion in Western aid and “forgiven” loans every year, yet remains the poorest country in Africa and one of the poorest, most aid dependent countries in the world.

Another very important fact not mentioned in the HRW report is that Ethiopia has the largest, best-equipped army in Africa.

Why is HRW refusing to report these crimes?

Could it have something to do with the $100 million “matching grant” mega billionaire US businessman George Soros recently “donated” to HRW? Ethiopia is a crucial supporter of US foreign policy, America’s gendarme in East Africa, and has mostly been protected by leaders of NGOs who are recipients of Soros’ largess.

The recent HRW report is just the latest example of this.