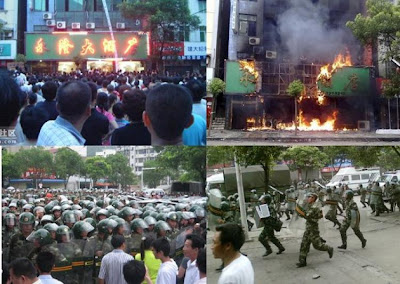 About 65 percent of mass incidents in rural areas are triggered by land disputes, which are affecting rural stability and development more than any other issue, land experts said.

China’s quick urbanization has provoked a new round of land seizures in rural areas to facilitate economic development, Yu Jianrong, a professor with the Rural Development Research Institute of the Chinese Academy of Social Sciences, was quoted by the Beijing News as saying on Friday.

“Since the reform and opening-up, more than 50 million farmers have lost all their land and nearly half of them have no jobs or social insurance. This has caused social conflict,” Yu said.

For the past two decades, the difference between the land compensation paid to farmers and the market price of the seized land is about 2 trillion yuan ($294 billion) for 14.7 million hectares, Yu said.

Zheng Fengtian, a professor of the School of Agricultural Economics and Rural Development of the Renmin University of China, said that due to the conflict between the shortage of land for construction required for quick economic development and the strict “red line” of 1.8 billion mu (120 million hectares) of arable land – the least amount necessary to feed the country’s 1.3 billion population – local governments turn to rural homesteads for development.

Governments should be service providers, not money-makers, in rural land management, but now many local governments want to make money through real estate development, triggering conflicts, the Beijing News quoted Li Changping, professor of the Rural Development and Construction Research Center of Hebei University, as saying, on Friday.

Local governments from more than 20 provinces and autonomous regions across the country are forcing rural residents to move to high-rise apartment blocks to increase the amount of arable land since the Ministry of Land and Resources issued a new document on rural housing land in 2008. The document said local governments could increase arable land through housing land reclamation.

Zou Xiaoyun, deputy chief engineer of the China Land Surveying and Planning Institute, said many local governments are using the document to gain assets, which is not its intention.

In Zhucheng, Shandong province, 1,249 villages with 700,000 residents were combined into 208 rural communities with about 80,000 mu (5,333 hectares) of housing land reclaimed, Xinhua News Agency reported on Tuesday.