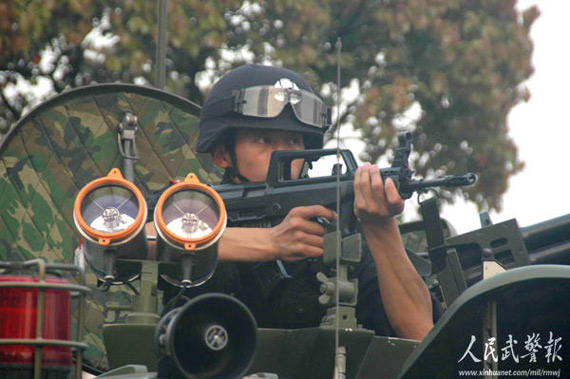 BEIJING: Security forces in the southern Chinese city of Guangzhou are leaving nothing to chance to ensure the safety of the thousands of competitors and spectators attending the Asian Games. Police have carried out counter-terrorist and hostage rescue drills, stepped up checkpoints in and around the city, increased disease monitoring and cracked down on arms possession ahead of the huge 16-day event starting November 12. China wants to avoid any repeat of events seen in the run-up to the Beijing Olympics in 2008, including the fatal stabbing of a US Olympic coach’s relative by a Chinese man and deadly attacks in the west blamed on Muslim militants. The nation deployed an unprecedented security force in the capital that year – more than 150,000 police and other personnel.

So far, authorities have not revealed the size of the force in Guangzhou but stressed the importance of the task at hand. “Security is our top concern and our top responsibility for the success of the Games,” Gu Shiyang, vice secretary general of the Guangzhou Organising Committee for the Asian Games, told AFP. “We are fully aware of the threats from outside the country and also the risks within the city or within the territory. We have made great efforts to make our city safe, to make our Games safe.” Nearly 12,000 athletes from 45 countries and regions will be competing in Guangzhou, the capital of Guangdong province which sits in the Pearl River Delta, the hub of China’s huge export-oriented “workshop of the world”. “Guangzhou has a very large economy. The huge flow of people, goods and capital has also led to the complex security situation in the province,” senior Guangdong police official Zhang Zehui told the Global Times.

Cracking down on violent crime, including cross-border gun and drug trafficking with neighbouring Hong Kong and Macau will be a chief concern, police said. Guangzhou “is close to Hong Kong and Macau and there is regular cross-border traffic, which results in an influx of firearms to Guangzhou,” Zhang said. “It is a serious problem.” Public security authorities have set up a “security firewall” around the city that consists of 132 checkpoints where police will examine people, vehicles and cargo coming in, Xinhua news agency said. Security checks will also be set up at subway, ferry, train and long-distance bus terminals throughout the city. Travellers refusing to undergo examination will be barred from the city and potentially fined, it said. Anyone wanting to buy kitchen knives or other large cutting tools will be required to visit designated shops and register with the police, the China Daily reported. Shops, meanwhile, will be fitted with surveillance cameras and other security equipment, and merchants have been ordered not to sell knives to teenagers or anyone with a “mental disability”, the paper added.

To avoid the ethnic unrest violence that erupted ahead of the Beijing Olympics in Xinjiang and Tibet, an elite counter-terrorism unit – “Lightning Commando” – has been set up for the Games. Police have also held special hostage rescue drills, including an exercise simulating the hijacking of a bus of athletes by armed gunmen in the Asian Games Village, it said. Fears of an outbreak of infectious diseases has also resulted in stepped-up monitoring by health departments, state press reports said. During the Asiad, police and security forces will enlist some of the 60,000 Games volunteers and 500,000 “urban volunteers” in Guangzhou to help monitor the public safety situation. afp