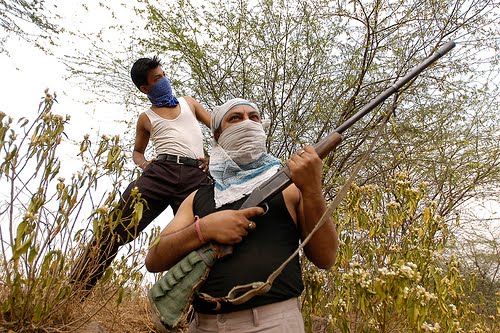 The Maoists have issued new threat to the people of Bihar’s Gaya District to boycott the Assembly polls in the State.

The Maoists pasted posters all across Bihar’s Gaya District on Monday threatening locals with dire consequences if they voted.

“What are we going to do in the elections? On one hand, the Maoists threaten us to boycott the elections whereas the political parties ask us to cast our votes. But how can we vote under so much of threat. If we vote we will also be killed,” said Vishnu Paswan, a resident of Barachatti block division here.

” We are not given any kind of protection. The police will be there for one or two hours and then they will run away. What are we going to do after that?” he added.

Meanwhile, the police said that they are keeping a vigil on suspicious elements and are carrying out continuous raids to stop Maoist activities.

“The Maoists keep giving such threats but the police and administration are on alert and continuous raids are being carried out with the help of paramilitary forces to stop Maoist activities,” said Senior Superintendent of Police (SSP) Amit Lodha.

Campaigning for the third phase of Bihar Assembly polls will end this evening.

The third phase of election will take place on October 28 for 48 seats.

Counting of votes will take place on November 24. (ANI)

Munger, Oct 26 (PTI) Maoists today torched three campaign vehicles at Badakihathiya in Bihar’s Munger district, police said here. Over 45 heavily-armed ultras stopped the vehicles belonging to RJD, Congress and Janvadi Samajwadi Party in a forest area, pulled the occupants out and thrashed them before torching the vehicles, they said. The vehicles were used for campaigning by party candidates for Tarapur Assembly constituency in Bihar, which would go to poll in the fourth phase on November One. Maoists have given a poll boycott call for the six-phase on-going elections in Bihar.

The rebels, who are village-level cadres of the banned outfit, were picked up from a forested village, Hallur, under Bhairamgarh area of Bijapur district, a part of restive Bastar region.

The arrests were made by a team of the district force (DF) and special police officers (SPOs).

50 Maoists hold forces at bay in Purulia
Oct 26
AYODHYA HILLS (PURULIA): A bunch of 50 battle-hardened youths led by an organisational veteran and a 30-something guerrilla fighter — that’s the Maoist manpower that is fighting the 2,000-odd policemen deployed in Purulia.

The key to the Maoist offensive is the two men — young strategist Bikram and guerrilla leader Ranjit Pal — controlling operations in the forests of Ayodhya Hills. Police believe that Bikram was responsible for the abduction of police inspector Partha Sarathi Biswas and teacher Soumyajit Basu on Friday night. The operation was reportedly carried out by Ranjit’s team. There is still no trace of the two men. Maoist sources confirmed the two abducted men were constantly being taken from one spot to another.

Partha Sarathi, who may have been moved outside Bengal, is being grilled about how much police know about Maoist movement in the area, the sources indicated. Police suspect Sou-myajit is being held in some hideout in Ayodhya Hills. On a foray into the hills along non-traditional trekking routes, TOI found out how a small group of youths had established control over a vast stretch of Purulia, using clever battle tactics and taking advantage of their strategic location.

They have just a few automatic rifles and limited ammunition at their disposal. Leading the charge is battle-hardened guerrilla Ranjit Pal alias Tarit, who hails from Jangalmahal and is now in charge of the Ayodhya belt. He is assisting Bikram, taking advantage of the treacherous terrain to fox the forces. Police have reason to believe Bikram hails from Kolkata’s suburbs. Maoists sources confirmed he is heading the outfit in the area as most senior leaders are busy monitoring the Bihar elections and preparing for the party’s special congress in January-February 2011.

With many leaders away in Bihar, Ranjit and Bikram have been entrusted with guarding a vital Red corridor spread across the Bengal-Jharkhand border areas. The jungle paths here provide the guerrillas with easy access to safe havens when security forces turn on the heat in either state. The Maoist sphere of influence is spread over hamlets like Kalijharna, Gurumjhora, Usuldungri, Chhatjamra and Hetalbera, which lie on either side of a narrow hilly pass through dense woods that connect Bagmundi to Balarampur (two different parts of the Ayodhya range) touching the Ayodhya hilltop, the highest peak. Most residents are poor enough to qualify for the ‘below poverty line’ tag and serve as a supply base for Maoists. It’s a 9km trek on an uneven, boulder-strewn road from Sirkabad at the foothills to the hamlet of Kalijharna, where the road ends near a rivulet.

Wanted Maoist arrested from Orissa
Malkangiri (Orissa), Oct 25 (PTI) A hardcore Maoist involved in a series of attacks, including the blasting of panchayat buildings in Orissa’s Malkangiri district, was arrested today.The ultra, identified as Pabitra Madhi (32), of Lachipeta village under MV-79 police station area was nabbed from Lachipeta forests by the security personnel in course of a combing operation, police said.Madhi, deputy commander of Motu Naxal Dalam, was apparently returning from his village when he was caught by the combing party comprising personnel from SOG and the Orissa police.During interrogation, the ultra confessed his involvement in planting a landmine in the newly-constructed jail at MV-79 and blasting the panchayat buildings at Malabaram and Malyamunda under Motu police station.He was forwarded to the court after his bail plea was rejected, they said adding combing operation had been intensified in the area to find out more number of ultras in the area.

The incident took place in Bhubaneswar where Maoists shot dead a 33-year-old construction supervisor after dragging him out of his home in Nabrangpur district in Orissa, Police Official said.

Rajput was supervising construction work taken up by a contractor. And suspecting extortion to be the reason behind the killing

A young woman carries a torn blouse and an undergarment and a lock of her hair in a clear plastic bag that rarely leaves her side. Kunjami Mangli (name changed) of the Bade Bidme panchayat in Chhattisgarh’s Dantewada district preserves these items as evidence of the events of the night of October 12.

“Four uniformed policemen burst into my house at 2 a.m.,” said Mangli, speaking through a translator. “They ripped off my blouse and brassiere and sexually assaulted me.”

“I was sleeping on the floor, one policeman put his foot on my head, pulled my hair and cut off a lock with a knife,” said Mangli. “The three others pulled up my petticoat and tried to rape me.” Mangli said her ordeal lasted about 15 minutes, even as her mother pleaded with the men to spare her daughter.

Mangli and her mother said the assault was perpetrated by the Koya Commando wing of the Chhattisgarh police. The Koyas are a commando unit raised from Adivasi special police officers, a tribal police corps recruited in the aftermath of the 2005 Salwa Judum, and is at the forefront of the Chhattisgarh police’s battle against the CPI (Maoist), a banned organisation committed to the overthrow of the Indian state.

Villagers say the October 12 raid began with an eight-hour blackout in which the adjoining panchayats of Bade Bidme and Phulpar were plunged into darkness. The police raid continued through the night during which, villagers say, policemen assaulted Kunjami Mangali and arrested Kunjami Bhima from Bade Bidme’s Kunjamipara village and picked another five men from Phulpar panchayat’s Domarpara and Koyalipara villages. In the last month, 12 residents of Bade Bidme have been arrested on the suspicion of aiding Maoists.

Villagers also accused the Koya commandos of breaking into houses and stealing utensils and jewellery. Kunjami Hidme, 26, of Kunjamipara said the search party had stolen Rs. 3,000, a pair of golden earrings, a necklace and silver anklets from her home.

The sexual assault on Kunjami Mangali is one of an increasing number of cases in which Adivasi women have allegedly been targeted by the security forces; both State and Central paramilitary forces stand accused of assaulting and raping young women during search operations.

In a June 8 report in The Hindu, three teenaged girls from Mukram village in Dantewada district stated that they were brutally assaulted by SPOs attached to the 62nd battalion of the CRPF. The National Human Rights Commission directed the Chhattisgarh police to conduct an inquiry and submit a report on October 1. A spokesperson for the NHRC said the police were yet to file a reply, and that the deadline for the inquiry had been extended to November 9.

On September 11, The Hindu published the testimony of two girls from Pachangi village in Kanker district, in which they accused personnel of the Border Security Force of sexual assault. BSF Director-General Raman Srivastav ordered a prompt internal inquiry.

When contacted on Sunday, BSF DIG Ram Avtaar said witness statements had been collected and the inquiry report would be submitted “soon.”

The Chhattisgarh police have consistently maintained that all such accusations are taken very seriously and inquiries are under way.