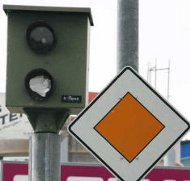 Foam attack cameraVigilantes set fire to a speed camera last Sunday at just before 11pm in Thames Valley, England, the Buckinghamshire Advertiser reported. The extent of damage to the automated ticketing machine on Two Dells Lane in Orchard Leigh is unknown. Police have no idea who might be responsible.

Police in Euskirchen, Germany reported that vigilantes had ripped a traffic camera out of the ground last week. On Friday at around 2:15pm the automated ticketing machine was found in a field.

In Donaueschingen, vigilantes used foam to block the lens of the automated ticketing machine in the downtown area last weekend. Police have no idea who might be responsible, so they will assume anyone who recently received a ticket is a suspect, Sudkurier reported.

In Portugal, fewer speed camera citations were issued this year, Correio da Manha reported. Officials admitted that cameras had suffered “acts of vandalism” affecting the number of tickets issued, as well as cameras being taken offline because they were no longer operating properly.