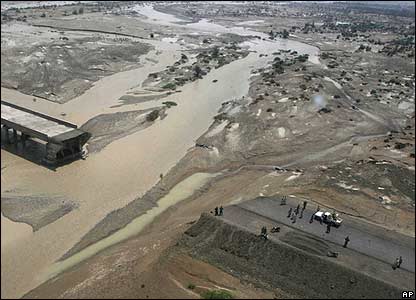 The three-day hunger strike is being organized under the aegis of Sindhu Bachao Tarla (Save Indus Struggle)—a civil society alliance, comprising the indigenous people, writers, intellectuals, NGOs striving for conservation of river ecology and the rights of people depending upon the river ecology.

The alliance has been quite active in raising the social and environmental issues that came in wake of implementation of TBERMP.

“We are observing this hunger strike to highlight the role of WB-funded Taunsa remodeling project that caused unprecedented flood disaster in the whole district. The flood originating from Taunsa Barrage has even affected the areas in the district that are not liable to be flooded the Indus,” said Fazal-i-Rab a representatives of the SBT.

The protesters complained the colossal scale of the devastation was largely because of the structural and design-related flaws, which were conveyed to the bank much before the disaster.

The scale of disaster would not have been so enormous had the WB responded to the flaws identified by the local people under the platform of the SBT, they added.

They demanded that $140 million loan of the WB should be cancelled and thus released money allocated for reconstruction and recovery in Muzaffargarh district.

They also demanded the establishment of an independent investigation commission to look at the design flaws of the WB funded Taunsa Barrage Rehabilitation and Remodeling Project.The five-year project started in 2005 was completed in June 2010.

According to a press release, cofferdams were constructed to carry out civil works in river channel, which were not removed after the Project completion in early 2010. These cofferdams obstructed flood flows and caused breach in the Left Marginal Bund (LMB) at Taunsa Barrage.

The crust level was raised by one foot during the Barrage Remodeling but protection embankments were not raised accordingly, which reduced the Barrage design capacity and contributed a lot in breaching the LMB resultantly unprecedented flooding in the area.

The sub weir constructed in the downstream of the Barrage has also disrupted flood flows and contributed into the Barrage failure.

The construction works especially the strengthening of protection embankments was sub-standard. The quality and standard of civil works were not ensured as per the rules of the WB.