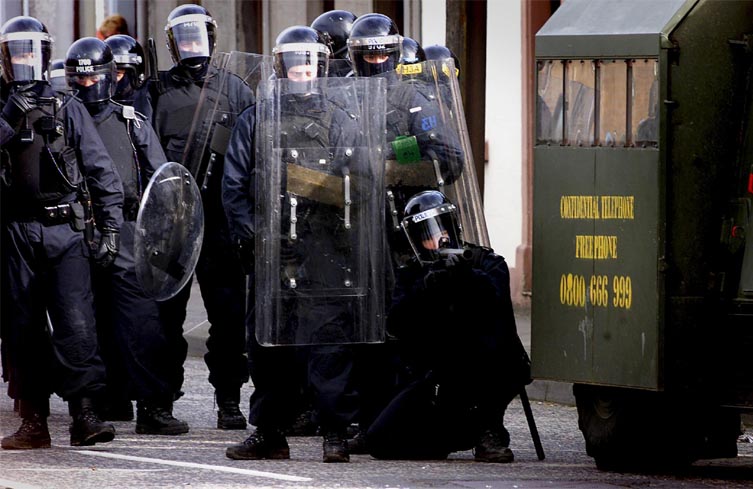 High-profile security measures will remain in place across Northern Ireland in a desperate bid to thwart planned attacks by dissident republicans.

Nine men including a 71 year old were arrested by gardai on Friday in operations in the Republic as part of the effort to disrupt the plans of the main dissident groups.

On Thursday, the deputy chief constable of the Police Service of Northern Ireland warned the public to expect to encounter disruption caused by security force operations.

Judith Gillespie said the operations were designed to prevent serious harm and keep the community safe.

Three days earlier, dissident republicans exploded a bomb outside the Ulster Bank on the Culmore Road in Derry — sparking fears that a renewed phase of terrorist activity had begun.

There had been a relative lull in dissident activity in September after a similar carbomb attack in Derry and at least three under-car bomb attacks — including one against an off-duty British Army major in Co Down.

Security personnel say they fear that a wave of similar attacks has been planned by the Real IRA and Oglaigh na hEireann, which is regarded as the group with the most highly skilled former Provo bomb makers in its ranks.

The PSNI’s Assistant Chief Constable Alistair Finlay said last Thursday that the introduction of vehicle checkpoints across the North had not been prompted by specific intelligence information but was designed to “disrupt and suppress” those engaged in terrorist activity.

Trade unions in Derry have organised a protest rally in the Guildhall Square for next Friday to voice their opposition to ongoing dissident republican activities.

Liam Gallagher, the secretary of Derry Trade Unions said, “People have a genuine fear that sooner or later we may see another Omagh.”

The North’s Deputy First Minister Martin McGuinness said: “The tragedy of the other night was not just that lives were put at risk, but . . . they are probably damaging the prospects for their own family circle for employment.”