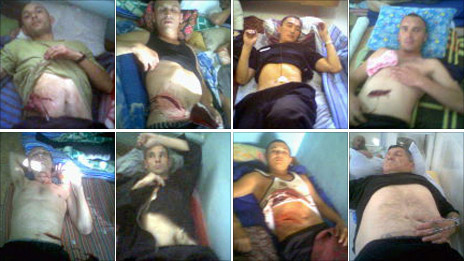 ASTANA, Oct 10, 2010 (IPS) – Horrific protests that have seen hundreds of inmates slice their stomachs open over conditions in jails in Kazakhstan are set to continue as the UN accuses the Central Asian country of trying to mask the real state of its prison system.

Convicts have said that torture, beatings and rapes are common in prisons and that the only option left to them to highlight their plight to the outside world is brutal self-mutilation.

Tanja Niemeier, political advisor who was part of a delegation led by European MP Joe Higgins to Kazakhstan last month which met with former prisoners, told IPS: “Protests are still going on and it looks like they will, unfortunately, continue and more people will self-mutilate. It is the only way they have of protesting at the desperate conditions they face.

“Officials have tried to say that the situation is improving. But it is not. Things are very grim.”

Kazakhstan, a resource-rich former Soviet state in Central Asia ruled since 1991 by autocratic President Nursultan Nazarbayev, has faced international criticism for its human rights record for years. Abuses of fundamental freedoms have been documented at all levels of society.

But some of the most severe criticism has been levelled at the penal system, and particularly over torture in jails.

Former convicts have spoken of horrific brutality in prisons. They have recounted instances of inmates being hung from the ceiling and beaten, guards urinating on cell floors and then dragging prisoners around using them as human mops to wipe the floor, while others have been forced to lick spit off floors.

Complaints over brutality in jails only lead to more beatings and a transfer, often to a more violent prison, they claim.

Living conditions in the jails — which were built as Soviet gulags — is also a problem. Convicts are often kept in converted barracks that house up to 100 people and sometimes cells meant for ten hold up to 20 inmates at any one time. Prisoners say they are only allowed to use a shower once every two weeks and that they are underfed.

Convicts’ desperation at the situation has led to the current wave of self- mutilation. More than 100 prisoners have self-mutilated in the past two months, with pictures taken on mobile phones of inmates with stomachs sliced open given to media as evidence. Some inmates have managed to talk to local media from their cells to speak of their ordeal.

The Kazakh government has claimed that the prisoners are not actually protesting against conditions and have been forced into cutting their stomachs open by gangs inside the prison.

Niemeier said: “That is the story the government has put forward. We have information from the prisoners themselves and we have no reason to doubt their claims.”

Kazakh authorities have also dismissed claims of widespread torture and said that complaints are thoroughly investigated but that many turn out to be unfounded.

But last year the UN’s special rapporteur on torture, Prof. Manfred Nowak, reported after visiting Kazakhstan that he had spoken to inmates and former prisoners who had told him of torture and the appalling conditions inside jails.

He wrote in a report at the time that “the use of torture and ill-treatment certainly goes beyond isolated instances.”

He also said that local authorities had tried to hide the real state of the prisons and that new beds and mattresses had been brought in, cells cleaned up, and prisoners forced to paint walls ahead of his visit.

Prof Nowak made a series of recommendations on improving prison conditions, including setting up a proper complaints procedure which would not lead to reprisals for inmates.

Speaking to IPS this week after a visit to Kazakhstan late last month to check on the implementation of his recommendations, Prof Nowak said authorities had been involved in “window dressing” the situation in prisons.

“Torture remains a major problem. The government did a lot to obstruct my fact-finding efforts in 2009. It was difficult for me to arrive at a good assessment of the situation,” he said.

He added that the recent spate of prisoners self-mutilating was worrying. “Every mutilation, self-injury or hunger strike is a serious source of concern. These reports have to be investigated and questions asked as to why these things are happening.”

Local rights campaigners say the prisoners’ protests have highlighted a penal system which has reached a “critical point”.

Vadim Kuramshin, a prominent lawyer and rights campaigner who has previously been jailed for libel and who says he was tortured and raped in prison, told media after protests last month: “The situation in Kazakh prisons has reached a critical point. The system requires cardinal changes, but no one wants to do anything about it. Torture is widespread. The mechanism for lodging complaints about the actions of the prison authorities does not work at all. And there is simply no response to any of the complaints.”

Matthew Pringle of The Association for the Prevention of Torture NGO, whose organisation attended a meeting in Kazakhstan last week along with Prof Nowak on the implementation of Nowak’s rights recommendations, told IPS: “It is the same old problem — torture, including beatings to get confessions out of people. There is a lot of work that needs to be done to get the situation changed.”

Niemeier said that MEPs would now be working to bring pressure to have a December summit of the Organisation for Security and Cooperation in Europe (OSCE) — which Kazakhstan is currently chairing — cancelled over the continued abuse of prisoners.

“We are doing our best to bring pressure on MEPs to raise questions in national parliaments and have this summit stopped. Western states are turning a blind eye to Kazkah torture because they want the country’s resources,” she said. (END)

This entry was posted in prisons, resistance and tagged kazakhstan, repression, state terror. Bookmark the permalink.