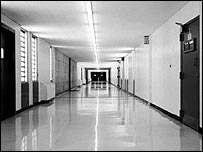 According to Mark Collins, public information officer for the Federal Bureau of Prisons’ four-prison correctional complex in Florence, the incident happened at 12:05 p.m. Wednesday in a general population housing unit at the prison.

“One inmate brandishing a homemade weapon attacked a male correctional officer. The officer sustained three puncture wounds — one in the arm, one in the back and one in the shoulder,” Collins said. “Staff responded immediately and did an outstanding job of gaining control of the inmate, preventing further injury to the officer.

“The officer was taken to a local hospital for treatment of the nonlife-threatening injuries. Sutures were required to close two of the wounds and the third wound did not require sutures.”

The officer has been released from the hospital and is recovering at home.

The inmate responsible for the attack was transferred to another prison.

According to the Federal Bureau of Prisons website, serious assaults on staff at the nation’s 16 high security prisons have ranged from one to eight per month through the end of May this year. The U.S. Penitentiary in Florence houses 836 high-security inmates.

Security and safety concerns, along with staffing levels at the federal prison complex have garnered national attention in recent years.

A 2007 near-riot where seven correctional officers were injured while breaking up fighting inmates with weapons, and a 2008 riot involving as many as 200 inmates particularly have drawn attention by law enforcement and lawmakers.