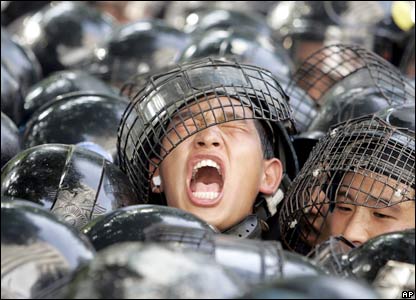 Progressive organizations such as the Korean Confederation of Trade Unions will stage Friday demonstrations against the G20 Seoul summit slated for November, beginning with the campaign “Day for Shared Global Responses” in central Seoul.

Police will seek to curb illegal protests under a law on the safety and security of the G20 summit to take effect the same day.

Previous G20 summits held in London and Toronto saw violent protests, so fears of a similar situation in Seoul are rising.

Protests to begin in time with new laws

Eighty-one left-leading civic groups including the People`s Solidarity for Participatory Democracy launched a joint organization against the G20 Sept. 15 under the theme “People Must Come First.”

The organization will begin protests in time with the law`s enactment.

Lee Chang-geun, in charge of policy planning at the progressive umbrella union and a staff member of the joint organization, said, “The government is undermining democracy and oppressing human rights by cracking down on street vendors under the excuse of ensuring a successful hosting of the G20 summit.”

“The special act is an anti-democratic law that suppresses the right to assembly and demonstrations.”

The joint organization will designate a week starting from Nov. 6 as the week for joint action to propagate the problems of neo-liberalism and the globalization of finance.

Clashes between police and progressive groups are expected Nov. 11, the opening day of the summit, since the organization plans to launch a large-scale protest.

Learning from the Toronto summit and heightened police presence

Detailed plans of the protest are unknown. A source at the organization said, “Detailed guidelines haven’t been presented yet because of differing opinions among participating groups. We also have sufficient time left before the demonstration day.”

Police, however, are bracing for sporadic demonstrations in areas surrounding the Seoul COEX, the venue of the summit, and hotels where leaders from major countries will stay.

An official of the Seoul Metropolitan Police Agency said, “We estimate the number of protesters will reach 10,000 to 15,000.”

Police are especially worried over the demonstrations turning violent and protesters’ attempts to enter the summit venue.

The official said, “We gathered intelligence that certain protesters are devising ways to effectively stage demonstrations by studying video footage of protests at the Toronto G20 summit,” adding, “Violent rallies are expected if protesters seek to enter the venue.”

A combined 400,000 police officers will be deployed for the summit. Demonstrations in areas surrounding the Seoul COEX and hotels where world leaders will stay will be strictly banned. Thirty-eight checkpoints will be set up in areas within a 600-meter radius from the Seoul COEX to block demonstrators from entering the summit venue.

The G20 summit, which brings together major world leaders and CEOs of multinational companies, has been a target for anti-globalization groups and terrorists.

At the June G20 summit in Toronto, more than 2,000 protestors including “Black Bloc,” a group of violent protesters wearing black clothes and masks, held violent protests by occupying streets and vandalizing police cars. Toronto police sprayed tear gas to disperse protesters and arrested those who marched into restricted areas.

Seoul police took over a large-scale movie studio near the venue four months ago to set up a detention center in preparation for the arrest of a large number of protesters.

At the Pittsburgh summit in November last year, thousands of members of civic groups including Greenpeace gathered to protest. When they sought to enter the summit venue, police used bean bags or special bullets to subdue protesters.

At the London summit in April last year, some 4,000 anti-globalization protesters held rallies and a man in his 40s was killed.