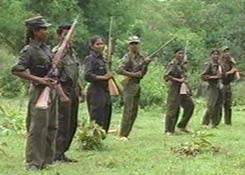 Acting on a tip-off, the police laid a trap and arrested four Maoists from their residences in Mahaka area on Wednesday.

“Police got the information through the informers about the two members, Jangu Netam and Suruj Netam, who are residents of Mahaka. They have come back to their home from Dalam and with full planning, police party of Sita village and Aundhi police station jointly trapped and arrested the Maoists,” said Ashish Agarwal, Station House Officer of Aundhi police station.

According to the police, the arrested Maoists had been involved in criminal activities like bomb blasts, laying of landmines, burning earth moving machines, and creating social unrest.

“These Maoists were involved in the Naxal activities since many years and were working as supporters of Naxalism. They used to visit villages but used to escape before police could trap or arrest them, and now police have arrested them,” said Agarwal. (ANI)

One Maoist killed, two held in Jharkhand
2010-09-17
Ranchi, Sep 17 (IANS) One Maoist rebel was killed and two others were arrested in Jharkhand Friday, police said.

A Maoist rebel was killed in firing between two groups of Communist Party of India-Maoist (CPI-Maoist) in Duarseni village of Gumla district, around 140 km from here.

Meanwhile, two Maoist rebels of the Tritiya Prastuti Committee were arrested from Nauka village in Garwah district, around 130 km from Ranchi. Police seized four rifles and live cartridges from them.

According to reports reaching here, a large number of armed rebels stormed into the core area of Sunabeda sanctuary, close to Naxal-hit Chhattisgarh, and triggered explosions blowing up several forest structures, Nuapada Superintendent of Police Bibek Rath said over phone.

Police received information about blasting of the abandoned forest range office, inspection bungalow and ranger’s quarter located inside dense forest, he said adding these buildings had been lying defunct and unoccupied for a long time due to Maoist menace.

The ultras had attacked these buildings last year and caused extensive damage to the structures. This time they have used explosives to blow up the buildings, Rath said.

A police team had been sent to the site, he said.