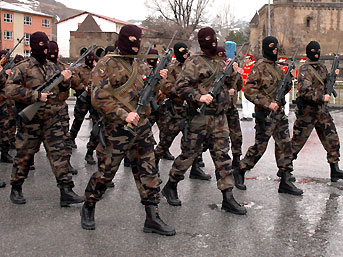 ANKARA, Turkey — Security forces killed nine members of the terrorist Kurdistan Workers’ Party (PKK) during a clash in the southeast province of Hakkari, near the borders with Iran and Iraq, on Tuesday (September 7th), security officials announced. One soldier was injured. According to local media, the PKK launched a rocket attack on a military post, triggering the fighting, despite the PKK’s unilateral ceasefire that ends on September 20th.

In other news Tuesday, police in the city of Adana seized 20kg of plastic explosives and arrested two people. Authorities suspect the PKK planned to use the explosives to launch attacks, ahead of the Sunday’s referendum on constitutional amendments.

On Monday, meanwhile, one soldier was killed in the eastern province of Tunceli during clashes with suspected terrorists from the Maoist Communist Party. Authorities initially blamed the PKK for the incident. The militants attacked a transformer at a local hydro power plant, setting it on fire. (Zaman – 08/09/10; AFP, Xinhua, Press TV, Dogan, Reuters, Anadolu news agency, DPA, Hurriyet, AP, Turkish Press, UPI – 07/09/10)