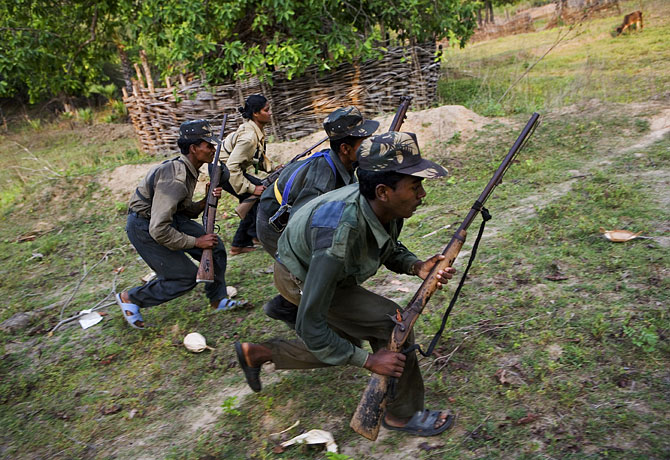 According to police, three guerrillas, including a woman, belonging to the Jharkhand Prastuti Committee (JPC) were arrested from Mangra village under Barwadih police station of Latehar district, around 140 km from Ranchi.

A rifle, live cartridges and Maoist literature were recovered from the arrested rebels.

Two guerrillas belonging to the banned Communist Party of India-Maoist (CPI-Maoist) were arrested from the jungle area of Vishnugarh police station of Hazaribagh district, around 145 km from Ranchi.

The battle, lasting for about two hours, took place in the Antagarh forested pocket of Kanker district when Maoists opened fire on a group of BSF men on a routine patrol.

The BSF retaliated but two troopers received gun shots. They were taken to Raipur by helicopter for medical attention, sources here at the police headquarters told IANS.

A few live bombs were recovered from the attack site where the Maoist attackers melted into the forests after the fighting, the sources said.

Kanker, along with four other districts, is part of the the 40,000 sq km mineral rich Bastar region which has been the nerve centre of the guerrillas for the last three decades.

From hunter to hunted: Salwa Judum leaders have nowhere to hide
2010-09-05
Raipur: Leaders of Salwa Judum, the anti-Maoist civil militia, say they are being hunted down in a planned manner by the rebels even as the Chhattisgarh government, which was widely accused of arming the movement at one time, looks the other way.

The movement, which took birth in 2005, grew under government patronage and was blamed for the escalation of violence and for victimising and alienating thousands of tribal villagers in the Bastar region, has almost fizzled out in the last two years.

‘Maoists have assigned a separate unit for killing Judum leaders and the rebels are getting regular success in wiping them out,’ Mahendra Karma, a former Bastar MP and Congress heavyweight who was credited for the launch of the movement.

‘About 200 Judum leaders have been killed in the past two years and some 400 face the threat of being killed any moment,’ Karma told IANS.

Raghu Singh, a key Judum leader in Bijapur, was killed by Maoists on July 22. Dozens of Maoists on July 8 attacked the house of Avdhesh Singh Gautam, another leader who is also linked to the Congress, in Dantewada district. He survived, but his son received a bullet wound and two others were killed.

Rights activists say under Salwa Judum, civilians were armed by the state government to go after Maoist supporters in the Bastar region in a planned manner, even though the authorities called it a spontaneous people’s uprising against the rebels.

‘The state government has distanced itself completely from the movement, leading to the collapse of the biggest popular public resistance against Maoists,’ said Karma, 60, who tops the hit-list of Maoists and has survived several attempts on his life.

Over 50,000 people became homeless as a fallout of Salwa Judum. Mostly tribal poor, they were uprooted from their forested villages and the government rehabilitated them in 23 makeshift camps in Dantewada and Bijapur districts.

Karma said the movement has been dormant for about two years now – no rallies have been held during the period and its leaders are living in relief camps. He said whenever they go outside their camps, Maoists target them as the government does not provide them security.

Chhattisgarh’s director general of police Vishwa Ranjan said, ‘Everybody, including police, know that Salwa Judum leaders face a serious threat, as Maoists keep track of them.

Anil Vibhakar, a Raipur-based columnist, said, ‘The Chhattisgarh government succumbed to the pressure of rights activists and pulled out support from the Salwa Judum and the movement collapsed. Now its leaders are either dead or living in fear of being killed any moment.’

The state’s first chief minister and Congress leader, Ajit Jogi, who was one of the strongest critics of the movement, said in the state assembly in July while referring to Salwa Judum, ‘the movement destroyed tribal culture and displaced thousands of poor tribals. It also became a hub of corruption.’

He came down heavily on the state’s BJP government for fully supporting the Salwa Judum. ‘The Maoists have a list of all leaders associated with the Salwa Judum whom they will wipe out as had happened with a similar movement in Bastar called Jan Jagran.’

The Bastar region is made up of five districts – Dantewada, Bijapur, Narayanpur, Bastar and Kanker – and is a considered the nerve centre of Maoist militants in India.

Chhattisgarh has witnessed over 1,948 Maoist attacks in the past three years claiming the lives of at least 418 civilians and 435 policemen.

Maoists kill 86 policemen since 2005 in Bihar: Report
September 5 2010
Patna: Maoists have killed 86 policemen in Bihar since 2005, being claimed in a official report. According to the statistics provided by the state police headquarters, 86 policemen and 188 civilians lost their lives in various Maoists attacks in Bihar.

The state government has initiated steps for ensuring speedy trial of cases related to Maoists and 226 cases have been disposed off by courts between 2007 and 2009 in which 109 Maoists were convicted.

In the mean time, Maoists have claimed that they have freed the 3 policemen, who were abducted in Lakhisarai district.

Bihar Chief Minister Nitish Kumar had said on Saturday the all-party meeting had reached a consensus on appealing to the Maoists to release the hostages unconditionally.

He said on Sunday that he had no knowledge about Maoists releasing the three policemen abducted during the Lakhisarai encounter on August 29.