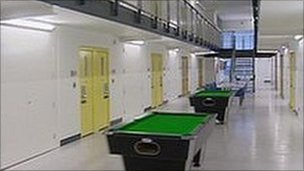 Three prisoners have been jailed for rioting at Scotland’s newest jail.

Paul Jackson, 25, from Coatbridge, pled guilty to wilful fire-raising and breach of the peace at Addiewell Prison in February 2010. He was jailed for three years and one month.

Mathew Harris, 23, from Aberdeen, and Kevin Kelly, 20, from Blantyre, both admitted breach of the peace and were jailed for two years and four months.

The sheriff said harsh sentences would deter other prisoners from rioting.

The riot took place at the prison, which is near Livingston, just eight weeks after it opened, Livingston Sheriff Court was told.

The trouble started after Jackson was refused a replacement CD player.

The sole female prison officer on patrol locked down Douglas ‘A’ wing as soon as the 35 inmates there showed signs of unrest.

An earlier hearing was told how the three men built a barricade from a pool table, broken furniture and TVs before going on the rampage.

They also flooded the wing by ripping a sink and water pipes from the walls, and Jackson severely damaged his cell by setting light to pillowcases and toilet paper under a bonfire of broken furniture.

The disruption lasted for four hours, until a riot squad broke through the makeshift barricade.

Sheriff Douglas Kinloch said: “This behaviour in my view can only be dealt with by the imposition of a custodial sentence.

“The court must do what it can to deter others from this type of behaviour while in prison.”

The sheriff said he took into account that no prison officer had been injured.

This entry was posted in prisons, resistance and tagged repression, riot. Bookmark the permalink.