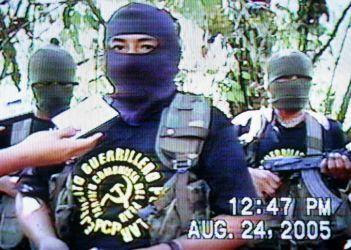 The men, who had military equipment and ammunition in their possession, were arrested Tuesday in the town of Alto Pacae by a counterinsurgency unit that was on patrol around the Huallaga River, Salazar told the N television news channel.

The guerrillas belonged to the main column led by “Comrade Sergio,” a commander who is close to the group’s leader in the Upper Huallaga Valley, the interior minister said.

The Shining Path’s remnants operate in the Upper Huallaga Valley under the command of Florindo Eleuterio Flores Hala, known as “Comrade Artemio,” and in the Valley of the Apurimac and Ene rivers, or VRAE, region under Victor Quispe Palomino, alias “Comrade Jose.”

The United States is offering rewards of up to $5 million each for information leading to the capture of Comrade Artemio and Comrade Jose.

The Huallaga region is one of Peru’s main coca-growing and cocaine production areas.

“We left that column of Sergio’s pretty much decimated,” Salazar said, adding that police cut the “umbilical cord between terrorism and drug trafficking” in Huanuco.

National Police counterinsurgency units have been focusing for several weeks on the Huallaga River, which flows through several regions in Peru’s central jungle and is used by traffickers to move drugs.

Comrade Sergio replaced “Comrade Ruben,” who was killed in a shootout in May with police, IDL-Reporteros said.

Two suspected guerrillas who were under the command of Comrade Ruben were arrested last week in connection with five attacks that left seven people dead, Peruvian media reported.

The guerrillas were captured in Aucayama, a town in Huaral province, while on what police described as a “rest” break, the N news channel said.

The suspects participated in several attacks in the Upper Huallaga Valley.