Northern Ireland flares, but will it ignite? 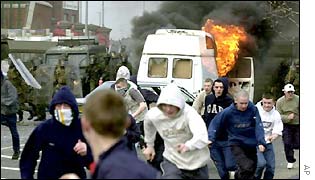 BANGOR, Northern Ireland The bombers were nothing if not audacious.

First they gleaned intelligence that a British army major would be spending the night at a friend’s place in this seaside town. Then they crept into “enemy” territory – republican militants in a loyalist neighborhood – and booby-trapped the soldier’s car as it sat in a suburban housing tract with a single small road leading in or out.

The plan went awry only when the bomb fell off the belly of the officer’s car as he drove away the next day, clattering to the ground without exploding.

It was one of three assassination attempts within a single week this month on people connected to the British and Northern Irish security forces. Together with other recent incidents, the failed attacks are part of an upswing of activity by republican rebels intent on disrupting the peace process that formally ended decades of heavy sectarian bloodshed in this divided territory.

The surge comes at a delicate moment. Tensions always run high in Northern Ireland in the summer, when parades by Protestant groups emphasizing their loyalty to the British crown create friction with their Roman Catholic, republican-minded neighbors.

But in addition, the province’s power-sharing Assembly is grappling with the difficult task of assuming responsibility for justice and policing from the British government in London, a transfer of power aimed at cementing the peace process but one that is fraught with controversy.

For extremists hoping to undermine progress, now may seem like a good time to strike, in order to harass the security forces during a period of transition and to exploit Catholic anger over the parade season, analysts say. The flare-up in violence has put residents on edge, particularly in areas where Catholic and Protestant communities rub up against each other in a close and uneasy coexistence.

“There’s an eerie tension here,” said Winston Irvine, a community development worker who lives in a loyalist stronghold of Belfast, Northern Ireland’s capital. “All we citizens are asking ourselves, what’s next?”

The escalation in violence has mostly been blamed on dissident republican groups that never accepted the Irish Republican Army’s decision to lay down arms in favor of pursuing the dream of a united Ireland through peaceful means.

They particularly despise Northern Ireland’s police force, once a Protestant bastion whose name, the Royal Ulster Constabulary, declared its support of the British crown.

Rebranded as the Police Service of Northern Ireland, or PSNI, the force is now 25 percent Catholic and is touted as a symbol of integration and hope. But many republicans remain suspicious of the police; it’s not unusual to see tattoos telling the PSNI to stuff it, in less polite terms.

For dissident groups such as the Real IRA and the Continuity IRA, the police service is still a hated instrument of British power, like the military, and members of both forces are prime targets for attack.

Besides the army major here in Bangor, a Catholic policewoman in the small town of Kilkeel and a civilian security guard at a police station in Cookstown both had their cars booby-trapped this month. In only the latter incident did the bomb detonate; the man escaped unhurt.

On Aug. 3, suspected republican dissidents hijacked a taxi, packed the car with 200 pounds of explosives and forced the driver at gunpoint to park the cab outside a police station in Londonderry. Though the heavily fortified station was largely unscathed, the predawn blast blew out windows of office and apartment buildings and badly damaged nearby businesses.

Adrian Guelke, a political scientist at Queen’s University in Belfast, traces the upsurge in dissident activity to March of last year, when militants succeeded in shooting to death two British soldiers and a policeman in the space of a few days.

Even though politicians of all stripes condemned the killings and declared their commitment to the peace process, the ensuing media coverage gave the dissidents a morale boost – and a recruiting tool.

“The adjective used the most to describe dissident violence before last year was ‘futile.’ It was just a waste of time,” Guelke said. “We’re seeing the harvest of what happened in March (2009) and the enhancement of their credibility as a threat.”

Pessimists fear it’s only a matter of time before a major attack finds its mark. Though the dissident groups have so far trained their fire on the security forces, Northern Ireland’s police chief warned this month that the violence could broaden and result in a repeat of a 1998 bomb attack in the town of Omagh, which killed more than two dozen civilians.

Last week, a senior member of a splinter organization called Oglaigh na hEireann (roughly “Soldiers of Ireland”), which claimed responsibility for the killing of the British troops last year, told the Irish News that it intended to widen its campaign of violence beyond Northern Ireland to anywhere “the British apparatus” operated, whether “in Belfast, Birmingham or London.”

The militant leader added that the group had no wish to inflict civilian casualties or to start a tit-for-tat cycle of killings with loyalist diehards.

But that is scant reassurance for Irvine, the community development worker. Irvine lives in the working-class Shankill Road area of Belfast, a neighborhood targeted by republican militants but notorious for its association with loyalist paramilitary groups that meted out violence in return.

Gone are the days when gun-toting British soldiers patrolled the streets, as was the case during the height of “the Troubles”; now, shoppers go about their business unmolested, and Catholic cabdrivers travel the area with little thought, at least during the day.

But there is a fear among residents, Irvine said, that republican extremists could shift from attacking police and soldiers back to targeting loyalists.

“Obviously, people will brace themselves and hope that whoever it is behind these attacks do not take it into a very deeply sectarian nature,” Irvine said. “In my own view, the peace process was and probably is only ever one horrific bad mistake away from shaking the foundations.”

In recent years, loyalist paramilitaries have on the whole been less active than the republican splinter groups suspected in the recent spate of violence. Lawmakers who appealed for calm in the aftermath of the killings of the two soldiers last year were encouraged by the lack of retaliation from hard-line unionist groups.

Last month, riots broke out in the heavily republican Ardoyne district of north Belfast over a loyalist march. Police blame dissident factions for fomenting the unrest and recruiting young people to their cause.

“They haven’t gone away, you know,” cried the front-page headline of the staunchly loyalist Shankill Mirror.

But community activist Joe Marley said that although some young people could “get sucked into those agendas,” the threat ought not to be exaggerated. “I don’t think areas like Ardoyne … have any desire to let things go back to what we saw on the streets in the ’70s and ’80s. People have suffered enough,” said Marley, whose father was shot to death by loyalist paramilitaries in 1987.

More important, he said, is to address the deep-seated economic problems in areas like Ardoyne, where unemployment is high and complaints are rife that Northern Ireland’s “peace dividend” has passed the place by.

But the economic picture could be about to get worse. The British government’s looming austerity plan is expected to cut especially deep in Northern Ireland, which relies on public funding more than any other region of the United Kingdom.

A further rise in unemployment and a drop in living standards could deepen disenchantment with the peace process and swell the ranks of angry, jobless young men susceptible to recruitment by shadowy fringe outfits.

“Low unemployment was important for sustaining the peace process,” said Guelke, the political scientist. “The dissidents will really go to town over that.”

For now, residents are left to rely on the repeated declarations by their political leaders that there is no turning back on the peace process.

Martin McGuinness, a one-time IRA commander who now serves as deputy first minister of the Northern Ireland Assembly, has been especially praised for reiterating his commitment to peace and denouncing violent incidents of the kind he once espoused.

“Those public utterances are important,” said Irvine. “However, if they become only words without any real action or real deed behind the statements, then we are in danger of treading our way into something much more dangerous.”