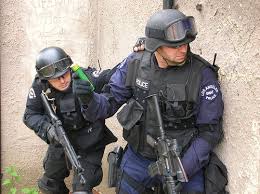 Most of the devices displayed at the Police Trexpo East last week cost a pretty penny — thousands, hundreds of thousands, and millions of dollars. But in the middle of the elaborate and the high-end, there were plastic orange sticks no longer than a straw.

The uncomplicated rods are meant to secure firearms during training while easing the nerves of all involved. A gun can’t fire with one inside its barrel, and the bright orange stick is clearly visible to those at the other end of the weapon. It alleviates worry and eliminates the possibility of someone getting shot.

John Carlin offered his invention for free at the expo. They would’ve cost just $5 if he had charged for them. “It’s as simple as it gets,” Carlin said.

In recent years, 30 police officers have been shot and killed during training exercises. This month, an officer in Montreal was shot in the leg during a drill. And Carlin, himself a firearms instructor, never cared for looking down the barrel of a gun during his own classes.

A retired police officer from Minnesota, Carlin’s admittedly low-tech product attracted quite a buzz even among the SWAT vehicles, lasers and weaponry.

Many technologies showcased at the expo could cross over from law enforcement to military to homeland defense efforts. Companies and organizations large and small came from all over the country to promote their products. In all, there were more than 130 exhibits at the expo, sponsored by POLICE Magazine.

Here’s a taste of some of the exhibits:

* From Michigan, EOTech’s holographic weapon sights maintain accuracy if covered in snow, mud or even cracked. No matter the obstruction, a target will continue to show up in the form of a star that looks like a red fireworks explosion.
* From Oklahoma, Simulator Systems International offers three kinds of robots named for snakes — the Copperhead, the Sidewinder and the Python. The latter can tow about 200 pounds, climb stairs and blast someone with a taser or pepper spray, sales representative Terrance Blacknell explained.
* From Kentucky, ARE Innovations co-owner Jim Bolen makes and sells goggles that can suddenly take away or restore one’s vision. Originally made for athletes looking to improve reaction times, they have been recast for military and law enforcement personnel. A recent experiment in Franklin, Ohio, found police officers recognizing and responding to threats three seconds quicker after using the goggles. “You see with your brain, not your eyes,” Bolen said.
* From Washington D.C., the Department of Homeland Security demonstrated a few of its inventions, including a forensic camera designed for mass transit. Last year, DHS rigged a retired transit bus with explosives and 16 of the prototype cameras. The bombs blew the bus to pieces and sent the cameras flying in all directions. All the cameras survived, and memory chips containing video leading up to the detonation also survived in 14 of the cameras. Testing will continue on cameras deployed on regular bus routes and trains. Several major U.S. cities, as well as the Transportation Security Administration, are interested in the technology, DHS officials said.
* The folks at DHS also showed off its Light Emitting Diode-Incapacitator, or LEDI. The flashlights send out a combination of wavelengths to flashblind and disorient a human target. The device’s range goes up to about 50 feet. It could be used for riot control, in prisons, by SWAT teams and against snipers or hijackers.
* From Pennsylvania, Crime Scene Clean-Up was there to promote its services to make horrific remnants disappear. The company specializes in cleaning up after murders, suicides and decompositions. In one year, the company disposed of 50 tons of hazardous and medical waste.
* Also from Pennsylvania, Mobile Concepts by Scotty had a “purpose-built” vehicle on site. The company can put everything from communication satellites and surveillance cameras to flat-screen TVs and gun racks on a truck. Mobile Concepts has provided vehicles for U.S. Customs and Border Protection for processing and detainment, the Army’s mobile command centers in Iraq and for Pennsylvania Emergency Management mobile commands.
* From New Hampshire, Insight Technology produces an array of night vision and illumination devices. Insight allowed visitors to try out its new thermal imaging binoculars, which revealed the infrared footsteps of expo attendees long after they disappeared from normal sight.