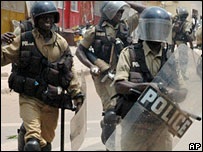 Security has been tightened in Kampala today with armed anti-riot Police and Military police deployed at Nakasero Market in Kampala Central division following intelligence information that the Kampala market vendors were planning to demonstrate over failure by Kampala City Council to collect garbage on time.

The Spokesperson of police in charge of Kampala Metropolitan Region, Ibin Senkumbi has said that the deployment is normal and necessary but hastened to add that it was not because of the threats by the traders to stage a demonstration.

He says police is closely monitoring all movements and activities of people in Kampala and other parts of the country and assures that police is determined to keep law and order across the country.