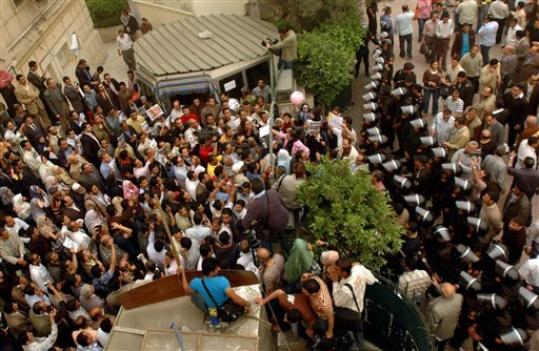 LONDON: Rising grain prices from Russia’s drought and fires will pressure populations already hit by the financial crisis and could stoke unrest — particularly in the Middle East, North Africa and parts of Europe.

Wheat prices have risen by nearly 70 percent since June after Russia suffered its worst drought in 130 years and are at their highest since 2008, when the last major food price rally sparked protests and riots in a string of emerging nations.

Analysts warn that if prices stay high then the threat of street violence will increase — at least up to a point.

“We could see some street riots but I wouldn’t expect any governments to fall,” said Jonathan Wood, global issues analyst for consultancy Control Risks.

“On one level, we have much less of a problem than in 2008 because we have better food stocks. On the other hand, because of the financial crisis many countries are not in such a good position financially to deal with it.”

Particularly in emerging markets where food makes up a higher proportion of household purchases, the price rise could filter through in inflation, rate hikes and wider deficits.

The Middle East and North Africa, particularly Egypt, are regarded as particularly vulnerable, as are emerging and southern European countries where discontent has already been fueled by harsh cuts in public spending, benefits and pay .

“Grain imports are particularly sensitive in the Middle East and North Africa — bread is such a crucial staple of the diet,” said Metsa Rahimi, analyst at security consultant Janusian. “Eastern Europe is also an obvious area of risk.”

Europe has seen less social unrest than many expected from the financial crisis — although riots in Greece in May unsettled global markets — but risks are expected to rise in the autumn as unions call strikes and spending cuts bite.

Central and Eastern Europe have pushed through tough measures to qualify for IMF and European Union aid, but analysts see patience running thin, particularly in Romania. Spain, Italy, France and the Baltic states are also being closely watched.

Much will depend on how long the price increase lasts and to what extent it filters through other commodities and foodstuffs.

That could swiftly bring angry mobs on the streets particularly in relatively poor authoritarian countries where maintaining food supply is seen as key to government legitimacy, they analysts said.

Russian Prime Minister Vladimir Putin was swift to impose an export ban, with the Kremlin likely to be keen to keep its silos full especially in the event of more damage to its winter crop.

Stratfor believes Russia may use the crisis to pull together nearby producers Belarus, Kazakhstan and Ukraine to form a regional grain cartel.

“Moscow very publicly has used energy supplies as a political weapon, either by raising prices or cutting supplies,” it said in a note. “Grain exports fall very easily into Moscow’s box of economic tools.”

Several key importers of Russian wheat including Saudi Arabia, Turkey and Jordan have been swift to say they have enough stocks and there will be no immediate impact on ordinary people. But they are nervous.

“The risks are always greatest where there are large numbers of urban poor and where food makes up more than 60 percent of the consumer purchase index basket,” said Alastair Newton, political analyst at Nomura.

“My top pick for potential trouble would be Egypt where tensions are already high with elections coming up and concerns about succession. Egypt has a long history of food price riots — but my guess is the main impact will be on the deficit as the cost of subsidies go up.”

Food prices and subsidies have always been notoriously political in Egypt, which faces elections next year with little clarity on whether 82-year-old President Hosni Mubarak — in power for almost three decades — will stand again.

There have been occasional scuffles at Ramadan food handouts in recent weeks and grumbling over raised pre-Ramadan prices but no repeat of the widespread protests seen in 2008.

The government met those first with a security clampdown then with the promise of higher wages.

Other countries being particularly closely watched for signs of unrest include Algeria, drought-hit Syria and already unstable Yemen.

In contrast, there is seen less immediate impact on Africa, in part because of stronger other staple crops particularly maize in the continent’s south. Nigerian food price rises have also slowed because of good local crops.

Even in West Africa’s Sahel — scene of a pre-existing food crisis — aid agencies say the Russian grain crisis and global price surge has had little local impact as yet.

But rising global prices could still put pressure on some recent land deals for food production in which Middle Eastern and Asian nations have bought up tracts of land in Africa and elsewhere including Ukraine and Pakistan for food. Hungry local populations might not like seeing food being trucked abroad.

The only major change of government linked to the last food spike was the 2009 coup in Madagascar, in which popular desire to overturn a South Korean land purchase was seen as a key factor.

Insurer Zurich believes food-related unrest worries will prompt more investors to seek protection against political violence damage and expropriation. That could push up premiums and the cost of foreign direct investment in affected markets.

“We would expect to see increased demand for our political risk products as a result of this,” said Dan Riordan, Zurich president for specialty products.

This entry was posted in agricultures, capital and class, ecological crisis, resistance and tagged crisis, social tension. Bookmark the permalink.