Chinese Hospitals Are Battlegrounds of Discontent 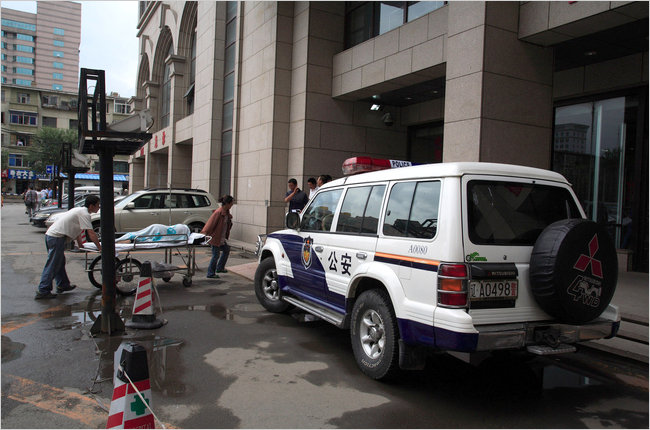 Dissatisfaction with medical care is common in the city and across China.

And not just at the entrance, but as deputy administrators. The goal: to keep disgruntled patients and their relatives from attacking the doctors.

The decision was quickly reversed after Chinese health experts assailed it, arguing that the police were public servants, not doctors’ personal bodyguards.

But officials in this northeastern industrial hub of nearly eight million people had a point. Chinese hospitals are dangerous places to work. In 2006, the last year the Health Ministry published statistics on hospital violence, attacks by patients or their relatives injured more than 5,500 medical workers.

“I think the police should have a permanent base here,” said a neurosurgeon at Shengjing Hospital. “I always feel this element of danger.”

In June alone, a doctor was stabbed to death in Shandong Province by the son of a patient who had died of liver cancer. Three doctors were severely burned in Shanxi Province when a patient set fire to a hospital office. A pediatrician in Fujian Province was also injured after leaping out a fifth-floor window to escape angry relatives of a newborn who had died under his care.

Over the past year, families of deceased patients have forced doctors to don mourning clothes as a sign of atonement for poor care, and organized protests to bar hospital entrances. Four years ago, 2,000 people rioted at a hospital after reports that a 3-year-old was refused treatment because his grandfather could not pay $82 in upfront fees. The child died.

Such episodes are to some extent standard fare in China, where protests over myriad issues have been on the rise. Officials at all levels of government are on guard against unrest that could spiral and threaten the Communist Party’s power.

Doctors and nurses say the strains in the relations between them and patients’ relatives are often the result of unrealistic expectations by poor families who, having traveled far and exhausted their savings on care, expect medical miracles.

But the violence also reflects much wider discontent with China’s public health care system. Although the government, under Communist leadership, once offered rudimentary health care at nominal prices, it pulled back in the 1990s, leaving hospitals largely to fend for themselves in the new market economy.

By 2000, the World Health Organization ranked China’s health system as one of the world’s most inequitable, 188th among 191 nations. Nearly two of every five sick people went untreated. Only one in 10 had health insurance.

Over the past seven years, the state has intervened anew, with notable results. It has narrowed if not eliminated the gap in public health care spending with other developing nations of similar income levels, health experts say, pouring tens of billions of dollars into government insurance plans and hospital construction.

The World Bank estimates that more than three in four Chinese are now insured, although coverage is often basic. And far more people are getting care: the World Bank says hospital admissions in rural counties have doubled in five years.

“That is a steep, steep increase,” said Jack Langenbrunner, human development coordinator at the World Bank’s Beijing office. “We haven’t seen that in any other country.”

Still, across much of China, the quality of care remains low. Almost half the nation’s doctors have no better than a high school degree, according to the Organization for Economic Cooperation and Development. Many village doctors did not make it past junior high school.

Primary care is scarce, so public hospitals — notorious for excessive fees — are typically patients’ first stop in cities, even for minor ailments. One survey estimated that a fifth of hospital patients suffer from no more than a cold or flu. Chinese health experts estimate that a third to a half of patients are hospitalized for no good reason.

Once admitted, patients are at risk of needless surgery; for instance, one of every two Chinese newborns is delivered by Caesarean sections, a rate three times higher than health experts recommend.

Patients appear to be even more likely to get useless prescriptions. Drug sales are hospitals’ second biggest source of revenue, and many offer incentives that can lead doctors to overprescribe or link doctors’ salaries to the money they generate from prescriptions and costly diagnostic tests. Some pharmaceutical companies offer additional under-the-table inducements for prescribing drugs, doctors and experts say.

An article in November in The Guangzhou Daily in southeastern China cited one particularly egregious example of unnecessary treatment: a patient paid roughly $95 for a checkup, several injections and a dozen different drugs, including pills for liver disease. He had a cold.

The Health Ministry has ordered hospitals to reduce prices of specific drugs 23 times in a decade, but the World Bank says hospitals have responded, in part, by ordering higher-priced alternatives.

Some experts fear that the newly opened spigot of government insurance money will inspire further excesses, rather than reduce the financial risk of illness for most Chinese. Indeed, one study shows only a slight drop in the share of household spending devoted to health care — 8.2 percent in 2008, down from 8. 7 percent in 2003.

“Their protection may not really be improving with insurance,” said Mr. Langenbrunner of the World Bank. “That is the scary part.”

Doctors seem as unhappy as patients. They complain that they are underpaid, undervalued and mistrusted. One in four suffers from depression, and fewer than two of every three believe that their patients respect them, a survey by Peking University concluded in October.

In June, more than 100 doctors and nurses in Fujian Province staged their own sit-in after their hospital paid $31,000 to the family of a patient who died. The doctors were upset because after the patient died the relatives took a doctor hostage, setting off a bottle-throwing melee that injured five employees.

Like some other cities, Shenyang has been seeking ways to ward off disturbances, including setting up hospital mediation centers. Still, the city reported 152 “severe conflicts” between patients and doctors last year.

At Hospital No. 5, the memory of a January attack remains fresh. After a doctor referred a patient with a temperature to a fever clinic — standard practice in China — frustrated relatives beat the doctor and several nurses with a mop and sticks.

Now a banner strung across the hospital’s main lobby exhorts: “Everyone participate in the sorting out of the law and order problem!”