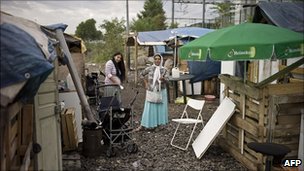 France has begun dismantling illegal Roma (Gypsy) camps following a presidential order for 300 such camps to be removed.

On Friday police were emptying a camp in the city of Saint-Etienne that had been home to at least 100 Roma.

The Romanian Roma had been there in makeshift shelters and tents since May.

It was the first move since President Nicolas Sarkozy ordered 300 illegal camps of travellers and Roma to be dismantled, AFP news agency reported.
Related stories

The order was a response to recent violence in which travellers attacked police in the Loire Valley town of Saint-Aignon.

Critics, including human rights groups, have accused the government of singling out an ethnic minority in a bid to win support among right-wing voters.

The area where the Saint-Etienne camp was situated had been cordoned off by police, who began the operation shortly after dawn on Friday, local media reports said.
Citizenship threat

There are hundreds of thousands of Roma or travelling people living in France who are part of long-established communities.

The other main Roma population is made up of recent immigrants, many from Romania and Bulgaria. They have the right to enter France without a visa but must have work or residency permits to settle over the long-term.

The riot in Saint-Aignon erupted after a gendarme shot and killed a traveller who had driven through a checkpoint, officials said.

The government then said about half the country’s illegal camps would be dismantled.

It described the camps as “sources of illegal trafficking, of profoundly shocking living standards, of exploitation of children for begging, of prostitution and crime”.

Mr Sarkozy has also said that anyone of foreign origin who threatened the life of a police officer should be stripped of their French citizenship.

He has ordered the immediate expulsion of Bulgarian and Romanian Roma who have committed public order offences.