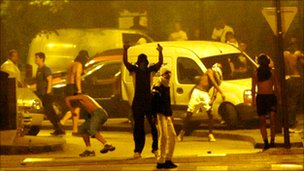 Rioters in the south-eastern French city of Grenoble have fired shots and burned cars after police shot dead a man accused of robbing a local casino.

The violence flared early on Saturday morning after a memorial service for the man, who was killed 24 hours earlier in a shootout with police.

The rioters also attacked a tram with baseball bats and iron bars.

The French interior minister Brice Hortefeux is to visit Grenoble on Saturday afternoon, his office said.

Police said they pursued two men suspected of holding up the casino at Uriage-les-Bains early on Friday morning.

The two men fired shots at them, police said, wounding an officer. Police returned fire, killing one of the men, Karim Boudouda.

The other suspect escaped and is still on the run.