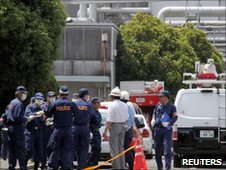 One person was killed and 10 others hurt when a former worker drove his car at colleagues at a Mazda factory in southern Japan.

The man, Toshiaki Hijiki, fled the scene but was later arrested near the Ujina plant in Hiroshima prefecture.

Police said he had been carrying a knife and had said he wanted to kill people, Kyodo news agency reported.

Mazda confirmed that he had worked at the company for less than a month before he resigned in April.

Police said that Mr Hijiki, 42, hit two people close to the plant’s east gate and then hit nine more inside the compound.

A 39-year-old Mazda employee was killed and of the 10 injured, two were seriously hurt, Kyodo said.

At a news conference, company officials said that Mr Hijiki was a temporary worker employed at the plant for a very brief period ending in April 2010.

”As far as we know, there have been no particular events involving him, such as getting into trouble with someone,” an official said.

Police said Mr Hijiki told them that he had a grudge against the company.

Violent crime such as this is rare in Japan. But there is concern that the economic slowdown has led to a bigger wealth gap, and a two-tier employment system that leaves temporary workers at a disadvantage.

This incident comes two years after Tomohiro Kato, then 25, stabbed seven people in Tokyo in an attack thought to be linked to anger over his job as a temporary worker at another car-maker.