Iraqi asylum seekers claim they were beaten on flight to Baghdad 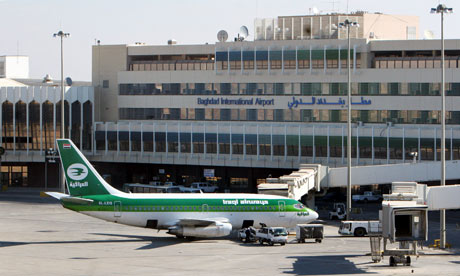 Baghdad international airport in Iraq As many as 25 of the 42 men deported were reported to be under detention in Baghdad airport despite having been screened in advance by Iraqi officials in the UK. Photograph: Khalid Mohammed/AP

The United Nations is to investigate claims that deported and handcuffed Iraqi asylum seekers were beaten by British security officers during a charter flight to Baghdad.

As many as 25 of the 42 men deported from Heathrow on Wednesday evening were reported to be under detention in Baghdad airport today despite having been screened in advance by Iraqi officials at detention centres in the UK.

Iraqi officials were alleged to have boarded the flight when it touched down early yesterday to help security staff employed by the UK Borders Agency (UKBA) punch and drag reluctant failed asylum seekers off the plane.

The UN High Commissioner for Refugees (UNHCR) has repeatedly condemned Britain and other EU countries for returning failed asylum seekers to Baghdad, maintaining that the country’s central provinces are unsafe.

UNHCR spokesman Andrej Mahecic revealed that its staff in Baghdad had interviewed deportees and now planned to investigate.

“We are concerned and are looking into the accounts that these people are making,” he said. “Fourteen of the 42 were interviewed by UNHCR lawyers in Baghdad.

“The men claim that they were beaten while being forced on to the plane. We met with six of the men and we saw fresh bruises that indicate mistreatment.”

Those who declined to cooperate were handcuffed at Heathrow before being put on the aircraft. The accompanying security staff were from the firm G4S which is employed by the UKBA to help enforce removals. Similar allegations of excessive force have been made in the past.

“During the flight I took my seat belt off,” said Abdullah, a Kurd from northern Iraq. “The officers jumped on me and grabbed me by the neck so I couldn’t breathe.

“Baghdad is dangerous for Kurds. People hunt Kurds in Baghdad for kidnapping or to kill them. When we landed Iraqi officials came on to the plane and said that if anybody did not come out [voluntarily] ‘we will kick you and beat you’.

“Some people were scared and went out. Then the [British security] officials and Iraqi officers started beating us. They were hitting us with punches and grabbing our necks.

“I am still bruised around my neck. They were saying: ‘This is your country. Go back to your country.’ I had my old Iraqi ID card so they eventually released me after holding me for many hours. Those without ID cards they said they would hold until their families came.”

Abdullah, who only wanted to give his family name, was speaking from a friend’s house in northern Iraq.

The International Federation of Iraqi Refugees (IFIR), which closely monitors deportations, said it had received a text message from deportees being held in custody. It read: “We have been in Iraqi since 4.30am [yesterday] but we have been locked up since. 25 people in one small cell even we can’t breathe. Some of us are seriously ill because of the hunger and the heat.”

One of those deported, Zed Karam, from Baghdad, warned before his departure that his life would be at risk. “I have lived [in the UK] for three years,” he said. “I had a good business in Iraq, I didn’t want to leave but I had to when I was threatened by the sectarian violence. If they put me on this flight they are sending me to my death.”

Refugee groups fear the mass return of failed asylum seekers marks the beginning of an accelerated programme of expulsions.

An abortive flight last autumn resulted in most of the deportees being returned to the UK by angry Iraqi officials. Since then intensive diplomatic negotiations – including allowing Iraqi officials unprecedented access to interview detainees in Britain – have improved coordination between London and Baghdad. Wednesday’s flight was the second this month.

Richard Whittell from the Coalition to Stop Deportations to Iraq said: “We fear this shameful act will lead to even more deportations to Iraq … The Foreign Office says Iraq is not safe to travel to so why force Iraqi refugees there? Are their lives less important than British people’s?”

Dashty Jamal, of the IFIR, commented: “The new government is playing politics with the lives of Iraqi refugees, many of whom had to leave because of the war David Cameron and his party supported. Iraq continues to suffer from the effects of this war and people should not be sent back there.”

“A minimum use of force is an absolute last resort, and would only ever be used when an individual becomes disruptive or refuses to comply.

“Even then, force is only carried out by highly trained officers, and should be carefully monitored, proportionate, and used for the shortest possible period to ensure compliance.”
http://static.guim.co.uk/sys-images/Guardian/Pix/pictures/2010/6/18/1276873200087/Baghdad-international-air-006.jpg

This entry was posted in Uncategorized and tagged immigration, state terror, united kingdom. Bookmark the permalink.