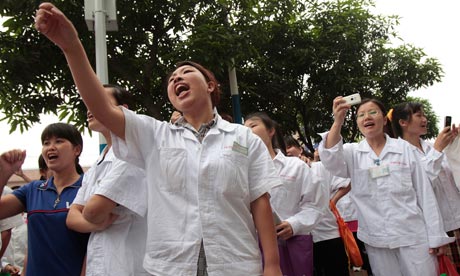 Although Honda Motor Co. ( HMC – Analyst Report ) has dissolved its labor dispute at the Zhongshan plant in Guangdong , the southern province of China , it is still far from being relieved. Last Monday, the factory manager at the plant summoned the plant workers to end the strike and return to work or else lose the job.

Minutes after the factory manager called in, all but half a dozen strikers were seen going back to the factory for fear of losing their jobs, although dissatisfied with their present remuneration. The replacement workers have possibly taken over the jobs of the remaining workers.

However, the workers, who have returned to jobs at the plant, have threatened to go back to strike on the same ground, rejecting the company’s proposed 20% hike in wages and benefits. Some workers are reportedly hindering or slowing down work at the company to impede its operations.

These workers have a different take on the story. The workers revealed that they resumed work only at the request of a Chinese government official. The official has promised to meet their representatives to resolve the strike by mediating with the company for the demanded pay hike by Friday.

The Zhongshan plant belongs to Honda Lock Co. – a supplier of door-locking systems – 65% of which is owned by Honda and the remaining by Xiang Suo, a business owned by the municipal government. Last week, about 1,500 workers at the plant went on strike demanding a doubling of basic pay to about $234 per month.

The strike at the Zhongshan plant is the third one that Honda faced in less than a month in the country. On May 17, the automaker faced the first labor strike at its Honda Auto Parts Manufacturing Co. plant in Foshan , Guangdong . About 1,850 workers, who manufacture transmissions and engine parts at the plant, walked out demanding a pay raise.

This caused the company to halt production at all four assembly plants in the country due to a shortage of parts. However, Honda resolved that strike in the first week of June by agreeing to pay raises of 24% to 32%.

Honda faced its second labor strike at its Foshan Fengfu Autoparts Co. plant in Foshan, Guangdong , also over a pay hike. The plant is a joint venture between Honda subsidiary Yutaka Giken Co. and a Taiwanese partner, and manufactures exhaust and muffler components.

Honda has settled the second strike as well by reaching an undisclosed agreement with the workers. The workers ended the two-day strike and returned to work on Wednesday last week.

As a result, Honda had agreed to the full pay raise demands at the Foshan plants while it has kept the Zhongshan strikers at odds. Firstly, the company has kept the workers at the Zhongshan plant under pressure by hiring replacement workers. Secondly, it has increased wages and benefits at the plant that were considerably less than the near doubling of wages that the strikers had demanded.

The Chinese government, who has discouraged strikes and censored reports about labor unrests so far, is also showing an inclination to change the low-cost manufacturing model of the country. It has reportedly encouraged local governments to raise minimum wage standards and asked companies to treat workers with greater dignity.

The labor dispute has put Honda in a backfoot with respect to its plan to expand production in China. The automaker’s sales in China accounted for 17% of its global sales in 2009. It will increase sales in the country by 9% this year to 630,000 vehicles.

Further, the automaker plans to lift production capacity in the country by 28% to 830,000 vehicles a year by the second half of 2012. It will also introduce two new models in the country to meet the growing demand for cars.

This entry was posted in resistance and tagged p.r.c., strike, worker resistance. Bookmark the permalink.